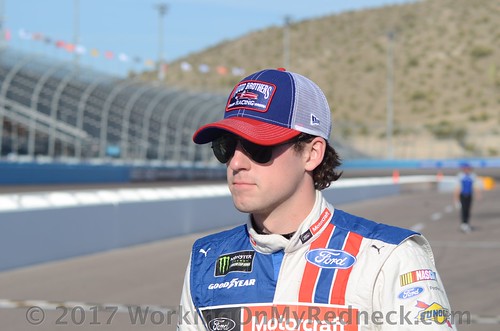 Once Ryan Blaney got the lead in Saturday’s Use Your Melon. Drive Sober 200 at Dover International Speedway, it was “game over” in the second NASCAR XFINITY Series Playoff race of the season.

After Playoff driver William Byron led every lap of the 60-circuit first stage and banked a playoff point, Blaney took the lead off pit road under caution on Lap 64. Blaney kept his No. 22 Team Penske Ford out front the rest of the way, except for one lap led by Daniel Suarez on pit road under caution after the conclusion of Stage 2.

Playoff driver Justin Allgaier charged from fourth to second on the Lap 128 restart that began the final stage, which ran under a green flag to the finish. Though Allgaier was able to hold off Byron, his JR Motorsports teammate, and hold the series lead, he had nothing for Blaney, who finished 4.852 seconds ahead of Allgaier’s No. 7 Chevrolet.

“It’s really hard to get a car like that, and, to be honest, we didn’t have it in the first run,” said Blaney, who will try to advance to the Monster Energy NASCAR Cup Series Round of 12 in Sunday’s Apache Warrior 400. “We were a little bit off on the first run. We made some great changes after the first stage to get it better to where it needs to be.

“We actually got it better for the last run… As a driver, that’s all you can ask for, great changes throughout. It’s awesome to get to Victory Lane with (sponsor) Fitzgerald. This is really cool. We were close the first race this year and just didn’t quite get it. Definitely learned a lot for tomorrow.”

The victory was Blaney’s sixth in the series, his second this season and his first at the Monster Mile.

Though he couldn’t catch Blaney over the final run, Allgaier also had reason to celebrate as the highest finishing series regular. Heading to Charlotte 54 points above the current cut line for the second round of the XFINITY Playoff, Allgaier is a virtual lock to advance.

So is Byron, who chased Allgaier for the final 73 green-flag laps but couldn’t find a way past his teammate. Byron is 51 points above the cutoff with the Playoff field scheduled to be pared from 12 to eight drivers next Saturday at Charlotte.

“I was trying to put it in Victory Lane,” Allgaier said. “We just needed a little more. I ran high some, low some. There at the end we made a great adjustment, and I was able to run the bottom, where I wanted to run all day.

“It paid off. Obviously, second place is not quite Victory Lane, but in the points battle we’re playing, it’s pretty darn close.”

In the battle to survive the Playoff cutoff, Brendan Gaughan gained ground with a 10th-place finish. Facing the elimination race at Charlotte, Gaughan is ninth in points, two behind eighth-place Ryan Reed, who finished a lap down in 16th-place at Dover.

Playoff drivers Daniel Hemric, Brennan Poole and Matt Tifft came home fourth, fifth and sixth, respectively, to improve their chances to make the Round of 8. Daniel Suarez ran seventh, joining Blaney as the only non-XFINITY regulars to finish in the top 12.