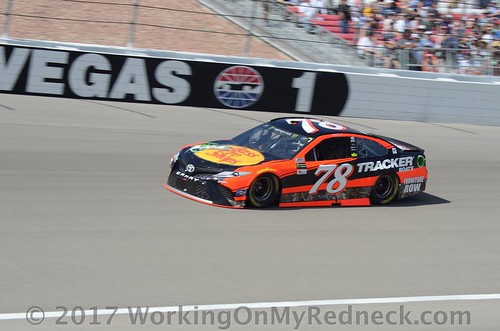 What’s it like to come to the race track knowing you’ll have one of the fastest cars every single week—even at venues that historically haven’t been your best?

Martin Truex Jr. now knows the answer to that question. The driver of the No. 78 Furniture Row Racing Toyota has enjoyed a dream season in 2017, winning a series-best five times and pacing the Monster Energy NASCAR Cup Series in laps led (1,835), stages won (19) and Playoff points accumulated (59).

Truex got a taste of success last year when he won four races and led 1,809 laps, but the surfeit of strong finishes hasn’t dulled his appetite for more.

And at this point, he seems to have inherited the expectation of speed from seven-time champion Jimmie Johnson, who was the dominant force in stock car racing from 2006 through 2010, when he won five of his titles in consecutive years.

Truex, on the other hand, won three races in his first 10 full seasons of Cup racing, before his pairing with crew chief Cole Pearn at Furniture Row Racing provided the critical mass for a meteoric ascent to the top of the sport.

And Truex is enjoying the view.

“I actually think I’ve talked to Jimmie about this before, you know, years ago at Champion’s Week or something,” Truex said. “I think every driver thinks about it at this level when you get here. It takes so many things to come together to be in a position that I’ve been in the past two years really, so, yeah, I’m very thankful and I’m definitely enjoying it.

“I’m trying to enjoy every single week one at a time. At the same time, there’s that chance at a championship out there, so you can’t lose focus and say, ‘Well, this is going great. We’re just going to show up to the track and everything is going to be fine.’ You still have to work hard. It’s still difficult.”

Truex underscored the importance of keeping his eye on the larger prize.