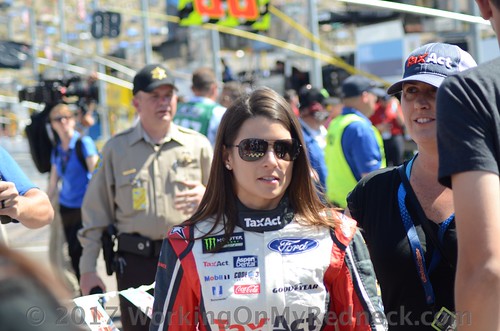 Seventeen days after announcing her departure from Stewart-Haas Racing at season’s end, Danica Patrick has no concrete plans for her future in racing.

For the time being, she’s leaving those matters to her ‘people’.

“Yeah, I’ve had some (discussions), but not a ton,” Patrick said on Friday at Dover International Speedway, where she is driving the No. 10 Warriors in Pink Ford to mark Breast Cancer Awareness month.

“As I’ve said for a good while now, I let business people in my business handle that and have those conversations and figure out what options are out there, and I’m going to let them do that.”

In her fifth full season of Monster Energy NASCAR Cup Series racing, Patrick has posted seven top 10s in 182 starts, with her best finish a sixth at Atlanta in 2014. She considers her pole-winning run for the 2013 Daytona 500 the obvious highlight of her stock car racing career.

“That one will be the biggest one that will stand out,” Patrick acknowledged. “There have been lots of little races along the way that I have felt have been much more difficult and much more representative of the hard work that I’ve put into the sport. But those don’t stand out because those weren’t wins or top fives.

“But top 10s and things like that and some runs that I’ve had have meant more to me. I definitely think pulling back a little further than individual events is the inspiration that you’ve been told you bring to people, especially to kids. That’s a role that you can’t buy your way into. You have to earn that… That’s probably the most meaningful.”

Patrick says she isn’t likely to return to IndyCar but won’t rule it out completely.

“I’m not planning on anything, going back to IndyCar,” said the 35-year-old driver. “Never say never, as I’ve said for many years, because I’m getting so old, and I know things can change.

“My life changes in ways that I wouldn’t expect it every couple of years. You just can’t cross off anything on the list completely.”

Editor’s Note:  I believe that Patrick’s NASCAR racing career will come to an end at Homestead.  Sponsorship money has all but dried up for her recently.  The ROI (return on investment) is no longer there, apparently.