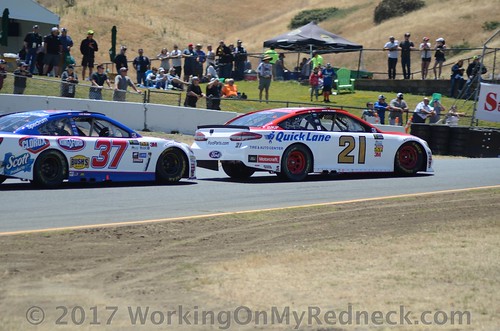 A recovery from a slow start in the playoff opener at Chicagoland Speedway, coupled with a strong run from the start at New Hampshire have Ryan Blaney and the Motorcraft/Quick Lane team in position to advance to the second round of the Monster Energy Cup playoffs.

Blaney enters Sunday’s race at Dover International Speedway, the final race in Round One, in eighth place in the standings and with a 26-point gap between him and 13th-place Austin Dillon.

The bottom four of the 16 drivers who entered the championship hunt will be eliminated after Sunday’s race.

Team co-owner Eddie Wood said he’s cautiously optimistic about Sunday’s race at Dover, given the team’s steady performance under great pressure the past two weeks, with finishes of 11th at Chicago and ninth at New Hampshire, and the speed the team has shown at Dover in recent races there.

“We had a fast car at Dover in June,” Wood said. “We were seventh in the first stage and eighth in the second before a mechanical issue set us back.

“We’ve seen this year just how important those stage points can be, so we’re hoping for a solid qualifying effort that will give us track position early, which will be a key to earning stage points.”

While the Wood Brothers have a Cup owners’ championship from 1963, this year marks the first time that the team has participated in the multi-round format that determines the series champion. No matter how Sunday’s race turns out, the 2017 season will go down as a memorable one for the sport’s longest continuously operating race team.

“We’re grateful just to be in a position to advance to the second round of the playoffs,” Wood said. “It’s just our second year back on a full-time basis after running a partial schedule for seven seasons.

“We’ve been fortunate to have the support of Motorcraft and Quick Lane and all the people at Ford Motor Company, and our alliance with Team Penske has been a key to us getting our 99th win at Pocono and being on the verge of advancing to the Round of 12.”