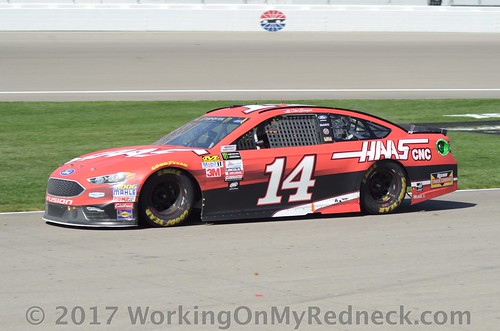 In June, Bowyer’s No. 14 Ford qualified 22nd in the 39-car field but, in Saturday practice, it posted the second-quickest 10-lap average. The next day, the No. 14 took off like a rocket when the green flag waved over the concrete, mile oval. Despite reporting some handling issues, Bowyer climbed to fourth and appeared to be a contender for victory as the race neared the quarter mark.

That’s when the day turned sour.

The crew noticed an oil leak during a lap-97 pit stop that forced Bowyer to the garage and kept him out of action for 16 laps. He returned to the track and managed to regain one of the lost laps, leaving him with a 31st-place finish.

“You never seem to have anything break when you’re having a bad day,” Bowyer said with a laugh. “It only seems like things break when you are running well. That (June Dover race) was disappointing, but you’ve got to be able to get over it. How does a golfer go on after a bad swing? It’s the next shot. You focus on that.”

Bowyer said he also takes the positives out of a bad situation.

“We know how good our car was that weekend and we’re pretty confident we can have one just as good this weekend,” he said. “If we do, then we could have a fun day on Sunday.”

Bowyer has history on his side at Dover, where he’s scored top-10 finishes in half of his 24 careers starts. That also includes two top-five finishes.

He arrives at the Monster Mile after a seventh-place finish Sunday at New Hampshire Motor Speedway in Loudon. The No. 14 Ford climbed to second with less than 30 laps remaining in the race, but couldn’t notch that victory Bowyer has made a priority in the remaining races this season.

“In this business, success is measured by winning,” he said. “Until we win, we won’t be happy.”

Bowyer has enjoyed more good than bad days in 2017. It’s his first season driving the No. 14 replacing three-time champion Tony Stewart. He’s posted three second- and two-third place finishes as part of his 11 top-10s in 2017.

While he fell one spot short of making the playoffs, Bowyer has been one of the top-performing drivers week in and week out in 2017 Cup Series competition.

The No. 14’s average finish of 14.5 is the ninth best of the full-time teams in 2017 – better than eight of the 16 teams in the playoffs. That’s even more impressive considering it’s Bowyer’s first season at SHR, his first season with second-year crew chief Mike Bugarewicz, and SHR’s first year with new manufacturer Ford.

But it’s earning that victory in one of the final eight races of the season where Bowyer prefers to direct his focus, and that mission starts Sunday in Dover.

The Monster Mile owes him one.