For a pair of drivers and a team seemingly never satisfied with anything less than a race win, Sunday’s third-place finish in the America’s Tire 250 IMSA WeatherTech SportsCar Championship race at Laguna Seca Raceway near Monterey, California was certainly something to celebrate.

It was the seventh podium in the season’s first nine events for co-drivers and brothers Ricky and Jordan Taylor and their No. 10 Konica Minolta Cadillac DPi-V.R teammates – kick started in the biggest way possible by victories in the first five races of the year – and it sent them to the season finale two weeks hence at the 20th annual Petit Le Mans at Road Atlanta with a whopping 29-point lead in the driver and team championships.

All that will be needed to clinch the 2017 driver title for the Taylor brothers will be for at least one of them to spend 45 minutes behind the wheel of their No. 10 Konica Minolta Cadillac DPi-V.R during the 10-hour endurance classic – the minimum drive time required for each to score championship points. And all that will be needed to clinch the team title will be to take the green flag at the start of the race. Finishing position will not be an issue for either championship.

For the first half of today’s two-hour, 40-minute race on the beautiful 2.238-mile, 11-turn hillside road circuit just a stone’s throw from the Central California coast, it looked like the Taylor brothers and their No. 10 Konica Minolta Cadillac DPi-V.R would be unstoppable, much like they have been for a majority of the 2017 season.

Ricky Taylor maintained a comfortable lead over the opening 30 laps from the pole position – his fifth of the season – he earned Saturday afternoon by a resounding .8 of a second. He held off outside polesitter Christian Fittipaldi and the No. 5 Action Express Racing Cadillac DPi-V.R that started the day second in the standings, 26 points back, by as much as 15 seconds during the opening 42 minutes of the race.

Taylor pitted to hand the car over his younger brother at the 42-minute mark, and the No. 10 Konica Minolta Cadillac DPi-V.R was back in the lead two laps later after the field cycled through the opening round of fuel-and-tire stops. Jordan Taylor held the lead until his first fuel-and-tire stop at the one-hour, 21-minute mark on lap 59. The No. 31 Action Express Cadillac DPi-V.R of Eric Curran and Dane Cameron was able to take advantage of a yellow one lap later and got in and out of the pits ahead of Taylor and was able to stay at the point for most of the rest of the race.

The No. 90 VisitFlorida Racing LMP2 prototype of Marc Goosens and Renger Van Der Zande, the eventual race winners, as well as the No. 5 Action Express Cadillac now driven by Joao Barbosa were both also able to get by Taylor on the day’s final scheduled pit stop with 43 minutes to go, leaving Taylor in fourth place.

Taylor was able to salvage the podium finish on the penultimate lap of the race when he got by Barbosa, who was balked by slower GT-class traffic.

“We just needed to get through today safely,” Ricky Taylor said. “Coming into it, we wanted to have a good race, gather some points. We couldn’t have another Mosport or Watkins Glen, so it’s a big sigh of relief and a nice little bonus being on the podium at the end. The Konica Minolta Cadillac was good all day. I think the 90 car was very strong, and congratulations to them. Now we can go to Road Atlanta and get our minimum drive time out of the way and attack for the win. I’m very excited to go there and not have to play the points game too much. This track with the sand and the wind and the pavement, it’s very hard on tires. Coming into the race, we knew it was going to be a factor – it was very, very hot. Starting off the race, I was trying to save the car a little bit. By the time I got to the end of the stint – the stints are long here because you use a lot less fuel – the tires actually didn’t drop off as much as I expected and our car was pretty strong at the end of each run. It’s just that last stint with Jordan, unfortunately we lost those spots at the beginning of the run during the stop and we couldn’t get them all back.”

“The car was fast this weekend with Ricky getting the pole and leading his whole first stint,” said Jordan Taylor, who won his first career championship driving the No. 10 prototype alongside veteran Italian Max “The Ax” Angelelli in 2013. “When I got in the car, it was difficult to drive. I think the heat and the track temperature and all the different kinds of rubber made it pretty tricky. The second drivers didn’t seem to have the pace of the guys who started, and everybody kind of caught up to us in the middle of the race. We couldn’t take risks with strategy like the 31 car could, and pretty much anyone else could, and that is where they jumped us. We had to play our strategy safe and maybe that cost us a little bit of track position. But, at the end of the day, it was still a good finish to have a podium, and we can go to Petit, now, with a pretty comfortable points lead. I was able to get by the No. 5 car into turn six when he went wide dealing with traffic. I just went over and under to make the pass. It was a good finish to get up on the podium in third.”

“Obviously, for me, I like to win every race,” team owner Wayne Taylor said. “We weren’t able to win today but we got a podium, which pretty much clinches the championship for us. All we will have to do is start the race at Road Atlanta for the team championship and do the minimum drive time with one of our drivers, so we can go there and really enjoy ourselves and go for the win rather than worry about the championship points. I’ve got to say thanks to everybody at Konica Minolta, Cadillac, GM, and especially this team of guys, drivers, all our followers and fans. I couldn’t be happier.” 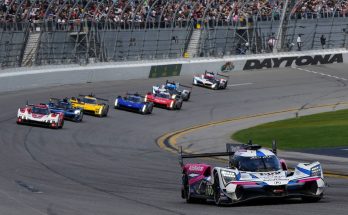 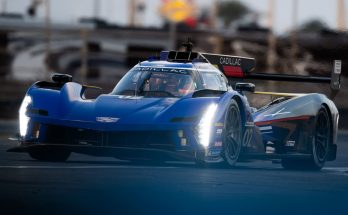 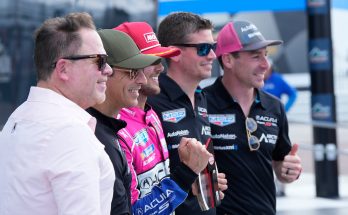