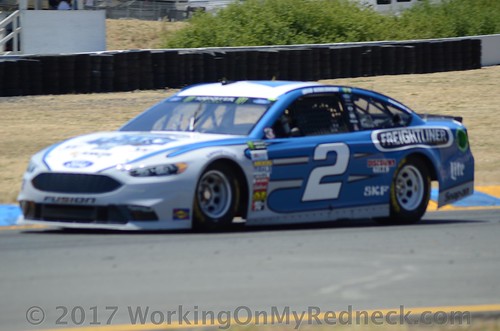 Recap: Brad Keselowski and the No. 2 Miller Lite Ford Fusion team continued their strong start to the 2017 Monster Energy NASCAR Cup Series Playoffs with a fourth-place finish in the ISM Connect 300 at New Hampshire Motor Speedway (NHMS) on Sundayafternoon. After struggling a bit in the Friday qualifying session, Keselowski started the first, 75-lap stage from the 13th position. However, he quickly raced his way into the top 10 at lap 14 on the strength of exceptional forward drive off the flat, NHMS corners. The first stage ran caution-free allowing Keselowski to show the strength of his Ford to finish seventh in the first stage. A great pit stop by the Miller Lite crew propelled their driver to the third position for the start of the second, 75-lap stage. Keselowski would maintain his position inside the top five throughout the second stage. The final lap of the stage concluded with a multi-car incident that involved some of the leaders, allowing Keselowski to finish third in the stage to score eight bonus points. The final, 150-lap stage began with Keselowski in the fifth position. As the stage began he radioed to crew chief Paul Wolfe that the balance was great on the Miller Lite machine but he needed to turn a bit better in the center of the corners. With the balance squared away Wolfe made minor adjustments all day and Keselowski did his part behind the wheel to stay inside the top five for the rest of the stage. The 2012 MENCS champion crossed the finish line in the fourth position to lock himself into the Round of 12 of the playoffs.

Quote: “It was great execution. The pit crew was really solid today and a pretty good setup on the Miller Lite Ford Fusion. Paul Wolfe and the engineers did a good job putting the right stuff under the car. I felt like we were where we needed to be to win and to run up front with the pit crew and the setup, just kind of lacking a little bit with aero stuff to keep up, but this type of track aerodynamics are a little less important and I felt like it helped us run a little bit higher this week.”

Recap:  Joey Logano started 39th and finished in the 10th position with the No. 22 Shell-Pennzoil Ford Fusion in Sunday afternoon’s ISM Connect 300 at New Hampshire Motor Speedway. Logano and his team missed the final practice session on Saturday afternoon as they served a penalty for pre-qualifying technical inspection issues on Friday; however, the team would press on, determined to overcome the major setback of the lost practice session. From the drop of the green flag, Logano set his sights on the front of the field and methodically gained positons throughout the first stage. Logano reached the top-15 by lap 40, despite the race running green for the entire opening stage. At the stage break Logano reported his Ford Fusion to be only slightly loose on corner entry and exit, and minimally tight in the center of the turns. Crew chief Todd Gordon adjusted with air pressure, sending the team back on the track in the 12th position, one spot better than where they had finished the opening stage. In the second stage, Logano continued in the 12th position battling a lack of forward drive-off and entry security. Gordon would again elect to adjust with air pressure at the stage break, sending Logano back to the track where he’d battle his way forward to the 10th positon. As the run continued, Logano reported that the adjustments hadn’t helped, and the team elected to go back on the changes on the stop at lap 222. Unfortunately, Logano had to check-up late coming into his box to avoid another competitor, and the team was assessed a penalty for a crewmember over the wall to early. The penalty dropped Logano to the 16th position where he’d again be forced to battle back in the closing 75 laps to finish in the 10th position. The finish marked the 150th top-10 of Logano’s career in his 319th Monster Energy NASCAR Cup Series start.

Quote:  “We worked our way up into the top 14 or 15 the first run from last and that was the highlight, and then we just kind of stayed right there around 10th the rest of the day and finished there. I don’t know, you can say if we started a little closer to the front we could hold a few of them off, but we’re just not fast enough really. I sound like a broken record, but we’re just not fast enough.”