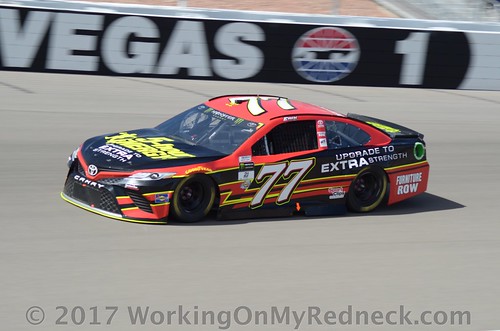 A solid day both on the track and on pit road earned Erik Jones and the No. 77 5-hour ENERGY Extra Strength Toyota team a sixth-place finish in the ISM Connect 300 NASCAR Cup Series race at New Hampshire Motor Speedway.

Jones started eighth, on the outside of Row 4, and ran in the top 10 throughout Sunday’s 300-mile race on the flat 1-mile oval. It was the Furniture Row Racing team’s 12th top-10 finish of the season.

The strong showing was a bit of redemption for the race here in July when Jones, who had qualified sixth, crashed on Lap 40 due to a cut tire and was stuck with a 39th-place finish.

“I thought the 5-hour ENERGY Toyota was about a third-place car all day,” said Jones. “We just kind of missed the adjustment there on that long green-flag run and lost some track position, got behind a little bit and then never could quite get the car back the way it was. Just unfortunate – we just couldn’t close out quite as good as we were running, but a top-10 day, so a strong day again for us.”

The race’s first stage ran caution-free for the entire 75 laps. Jones picked up two positions in the first 25 laps and was in fifth place by Lap 41. A loose handling race car didn’t slow him down much because he took the green-and-white checkered flag at the end of the stage in fourth place, earning seven valuable championship points.

Jones started the second stage in sixth place after a solid pit stop during the break. The car’s handling was still on the loose side but he maintained the sixth spot until a caution slowed the field on Lap 149, one lap shy of the stage finish. A multiple-car crash ahead of him, including race leader and teammate Martin Truex Jr., allowed Jones to pick up two spots to again finish fourth and collect another seven championship points.

The race was red-flagged for nearly 12 minutes to clean up the back stretch. When it was lifted, Jones dove onto pit road and another strong performance by the pit crew put him back onto the track in fourth place for the final 150-lap stage.

The adjustments made seemed to do the trick early on, as Jones settled into third place by Lap 166 and maintained the position until pitting under caution on Lap 220. Multiple cautions over the final 80 laps found him running from fourth to 10th. He ran fifth on Lap 280 and lost one position in the ensuing 20 laps to cross the finish line in sixth place.

Jones is currently 19th in the 2017 NASCAR Cup Series point standings. He is 16 points behind Joey Logano for 17th, the highest position outside of the playoff contenders.