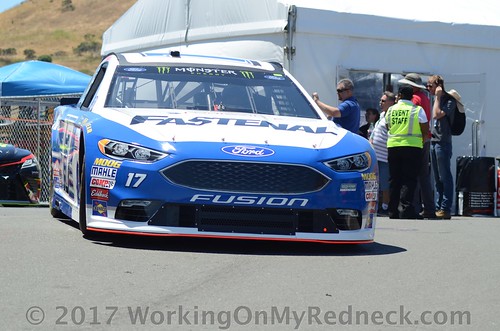 An early brush with the wall, compounded by a commitment line violation, relegated the driver of the No. 17 Roush Fenway Racing Ford to a 25th-place finish. In the Tales of the Turtles 400, Stenhouse’s slow and unsteady effort left him bringing up the rear among the 16 Playoff drivers.

But Stenhouse entered the race with 10 playoff points, thanks to his victories at Talladega and Daytona, and those markers kept him well within range of the cutoff point for the Round of 12. With just 15 points between 10th-place Ryan Blaney and 16th-place Ryan Newman, Stenhouse, now 14th, will design his race around the drivers he hopes to beat for the right to advance, come Oct. 1 at Dover.

“Last week, it was really an open book, and we really kind of just went for it and never really focused on certain cars,” Stenhouse said on Friday morning before opening Monster Energy NASCAR Cup Series practice. “I think we knew in the back of our heads which cars that we were going to end up racing. I mean, it’s not rocket science that you can tell which cars you’re going to end up racing for that final cutoff spot.

“I think for my crew chief (Brian Pattie) throughout the race, whether you stay out if a late caution comes in a stage and some cars pit to set themselves up for the next stage, or stay out to win that stage or get points, I think you can almost do the opposite and work strategy throughout the whole race based off of where those cars are running.”