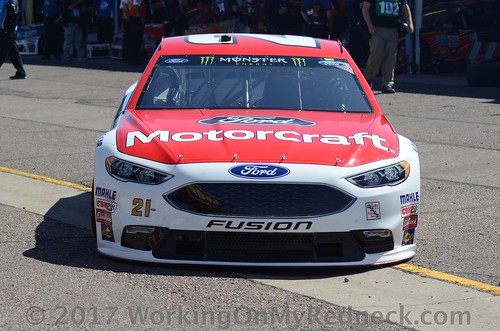 In one of the most important qualifying sessions of their 2017 season, Ryan Blaney and the No. 21 Motorcraft/Quick Lane team rose to the occasion and earned the fourth starting spot for Sunday’s 300-miler at New Hampshire Motor Speedway.

The flat, one-mile oval at New Hampshire makes passing difficult. That combined with the relative shortness of the race puts track position at a premium, and the No. 21 will be on the outside row for the start of the race. That puts the team in a better position to earn stage points in the first half of the race, and it sets them up for better track position later on as well due to the opportunity to pick a more advantageous pit stall.

Every point is of the utmost importance as Blaney and the team work to make the cut for the second round of the playoffs, which begin after next weekend’s race at Dover International Speedway. Blaney enters this weekend 10th in the standings but just eight points ahead of 13th-place Kurt Busch. The bottom four of the 16 playoff drivers will be eliminated after Dover.

On Friday, the near future looked promising. The Motorcraft/Quick Lane Fusion was fast from the start of practice at New Hampshire. Blaney was fifth fastest with a best lap at 135.030 miles per hour.

“I thought we made good gains through the rounds and that’s something to be proud of for sure,” said Blaney, who led the way all day for the Ford contingent. “We just didn’t pick up speed in the last round.

“We had good speed in the second one and some other guys went faster the last round, and we kind of stayed the same.”

“We made some good adjustments,” Blaney said. “I think that’s the best we’ve ever qualified here, so that’s something to look forward to and we have a good spot for Sunday.”

Among those closely following the events of the day at New Hampshire was the team’s long-time crew chief, NASCAR Hall of Famer Leonard Wood, who was back home in Stuart, Va., celebrating his 83rd birthday.

Wood was most impressed with Blaney’s dominance of the second round of qualifying.

“Wow!” he said, adding that the birthday weekend festivities will keep him at home instead of in the pit area at New Hampshire on Sunday.