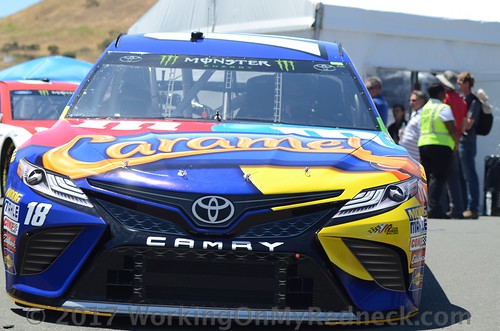 Kyle Busch went from the top of the chart to near disaster and back to the top again in winning the pole position for Sunday’s ISM Connect 300 at New Hampshire Motor Speedway, the second race in the Monster Energy NASCAR Cup Series Playoff.

After posting the fastest lap in the first round of knockout qualifying at the 1.058-mile track, Busch missed his mark entering Turn 1 in the second round and narrowly averted a session-ending crash into the outside wall.

The Coors Light Pole Award was Busch’s third at New Hampshire, his eighth of the season and the 27th of his career. Busch also started first on the grid for last Sunday’s Playoff opener at Chicagoland Speedway.

“I didn’t think I hit it very well, actually,” Busch said of his lap in the money round. “I was going to go out and run my second lap and try for a little bit more, but I slipped off of (Turn) 2 really bad, so I just had to abort. It definitely wasn’t going to be any faster.”

Busch acknowledged he was fortunate to keep his car intact after the slip in Round 2 that resulted from trying to keep his left-side tires in contact with the PJ1 traction compound that had been applied to the track.

“I gave myself too much room on my left sides, trying to keep ‘em in the black on entry, and it was like half a car too wide to the right,” Busch said. “I was nervous.

“I thought I was 48 and 24-ing there for a second (a reference to crashes in first practice by Jimmie Johnson and Chase Elliott), but I was able to hang onto it, surprisingly, and battle through on the backstretch and ease her off into (Turn) 3 and build my lap back up heading to the start/finish line.”

Erik Jones in eighth was the only non-Playoff driver to crack the top 12.

“I felt like maybe I got in the corner a little hot and got myself a little bit too loose and to the brakes too hard,” said Larson, who enters Sunday’s race second in the Playoff standings. “But I feel like overall my lap was pretty good. The No. 18 (Busch) has been really fast recently, and especially in qualifying all year.

“So for us to be second to him is not bad. We had the pole here earlier in the year and got encumbered (Larson’s time was disallowed because his rear decklid fin was outside specifications), but we had to back it up with a front row start. It feels good. We’ll have a nice pit stall selection. Hopefully we can have another smooth day.”

After a rough outing at Chicagoland and a subsequent crew chief change to veteran Darian Grubb, Kasey Kahne qualified ninth.

“Yeah, it was really nice,” Kahne said. “The car was balanced really well the entire day. We made gains every time out, and that final run I was just a tick tight and then gave up about a tenth that I thought I could run better.

“I gave up about a tenth, which I thought we could have been top five, and that would have been pretty cool, but, still, a really solid Friday.”