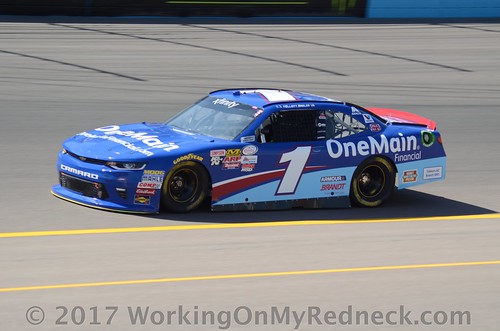 Elliott Sadler won the NASCAR XFINITY Series regular season championship, but only has one goal on his mind now – capturing the overall series crown.

He starts his quest in Saturday’s VisitMyrtleBeach.com 300 at Kentucky Speedway where he won the Playoff opener last year.

“Our OneMain Financial team has been gearing up for the playoffs ever since Daytona in February,” Sadler said. “Our strong regular season and Kentucky win last year helps our confidence heading into this weekend.”

Although Sadler earned the regular season championship, he starts the Playoffs third in the standings. He sits five points behind leader William Byron and trails second-place Justin Allgaier by three points.

“We’re still a long way from Homestead and that’s where we ultimately want to be – racing in the final four for the championship. Kevin (Meendering, crew chief), myself, and the guys are going to take it one race at a time, starting with this weekend’s race. We’re confident in our strategy and we’re ready.”