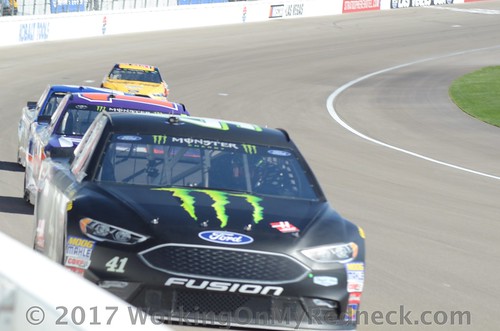 Daytona 500 champion Kurt Busch got off to a slow start in the Monster Energy NASCAR Cup Series Playoffs with a 19th-place finish at Chicagoland – the second-lowest showing among postseason drivers.

Right now, Busch sits 13th on the Playoff Grid. He’s even with Austin Dillon in points, but Dillon holds the tiebreaker for the 12th and final advancement spot.

Busch will try to move up the Playoff Grid as the series heads to New Hampshire Motor Speedway for Sunday’s ISM Connect 300. The No. 41 Haas Automation/Monster Energy Ford driver is tied for the active series lead with three New Hampshire wins. In 33 career starts at The Magic Mile, he also has three wins, eight top fives, 14 top 10s and a 15.6 average finish.

“It’s a track that has been pretty good to me since I started racing in the top series of this sport,” Busch said. “I raced there for the first time in the [Camping World] Truck Series and won that race. Then, it’s a track where I have three wins in the [Monster Energy Series] cars and, when you’re able to go to a track where you’ve had that kind of success, it just gives you confidence.”

A win by Busch on Sunday would advance him to the second round of the Playoffs and tie him with Jeff Burton for the all-time wins record at New Hampshire.

Busch explained what he needs his car to do to put him in position to take the checkered flag.

“It depends upon the circumstances but, yes, usually you’re trying to keep your eye on the main prize, which is Victory Lane at the end of the day,” Busch said. “If you have a run-in early in the race, that guy is going to be trying to find you or you’re looking over your shoulder. So if you can sort of hit a reset button and right a mistake, you do that, but not at the expense of taking yourself out of position for the win.”