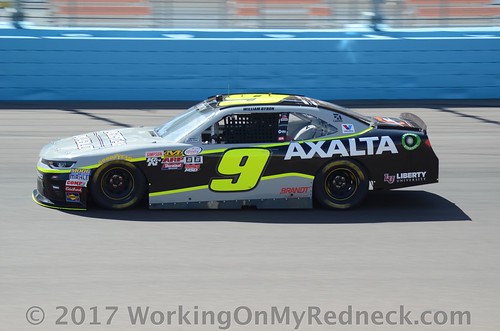 Twelve drivers will slug it out for the title through three rounds in the Playoffs.  The first round of the Playoffs, the Round of 12, is made up of three races – Kentucky, Dover and Charlotte. Four drivers will be eliminated at the conclusion of the Round of 12. A driver can advance to the next round by either winning one of the races in the round or accumulating enough points to be in the top eight of the Playoff standings.

The next round is the Round of 8, and it will consist of the eight Playoff title contenders that have advanced from the Round of 12. The Round of 8 is also made up of three races – Kansas, Texas and Phoenix. Another four drivers will be eliminated from the Playoffs at the conclusion of the Round of 8. A driver can advance to the Championship 4 by either winning one of the Round of 8 races or accumulating enough points to be in the top four after Phoenix.

The NASCAR XFINITY Series Playoffs will then be decided in the Championship 4 race at Homestead-Miami Speedway as the four remaining drivers battle it out for the title, with the highest finishing championship contender taking home the trophy.

Last season, Joe Gibbs Racing’s Daniel Suarez won the title after starting on the pole and winning the race in Miami. This season we are certain to see another new NASCAR XFINITY Series champion since none of this season’s Playoff contenders are former series champs.

A total of seven Sunoco Rookie of the Year contenders have made the NASCAR XFINITY Series Playoffs since its inception in 2016. This season, four rookies made the Playoffs: William Byron, Cole Custer, Matt Tifft and Daniel Hemric. Last season three rookies made it: Erik Jones, Brandon Jones and Brennan Poole.

The winner of last season’s Playoff-opening race at Kentucky, Elliott Sadler, went on to finish runner-up in the final championship points.