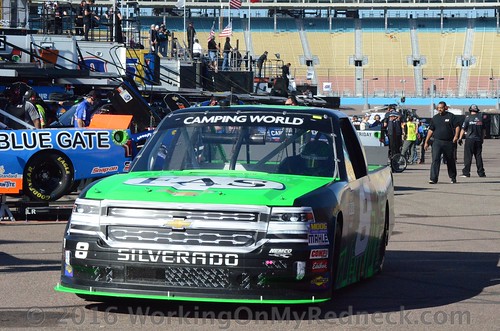 Nemechek doesn’t feel fortunate just to be one of eight drivers in this season’s NASCAR Camping World Truck Series playoffs, which startSaturday at New Hampshire Motor Speedway. He’s glad he’s racing at all!

Earlier this season, funding was threatening to dry up — again — for Nemechek and his No. 8 NEMCO Motorsports Chevy. That’s been a continuing problem for Nemechek’s Mooresville, N.C.-based team, which has struggled financially in each of the five years that he’s raced in the Camping World Truck Series.

Nemechek hasn’t let the consistent lack of sponsorship affect his performance on the track. Entering this season, he had three career victories and advanced to the playoffs in 2016.

But after seven races this season, Nemechek had funding for only a few more events, including the following week at Gateway Motorsports Park. After that — who knew what would happen.

Nemechek, however, had other things in mind. He won at Gateway, then again the following week at Iowa. Those two ultra-timely results helped convince sponsors — chiefly Fire Alarm Services — to re-up with Nemechek. That helped him complete the regular season and on into the playoffs, except for two races in the postseason he hopes will soon be filled.

“Winning those two races were definitely emotional, not knowing how many races we were going to get the rest of the year,” said the third-seeded Nemechek at NASCAR Camping World Truck Series Playoffs Media Day. “We had to find some sponsorship or we were done.”

For now, Nemechek just hopes his results will continue to attract much-needed dollars to help keep the team afloat.

“We set the bar high for what we do on and off the track,” he said. “I try and focus on driving, not funding. We do the best we can do to have winning equipment. We want to run up front and win races and stay locked in during the playoffs.”

But as for sponsorship, Nemechek said: “We definitely need something. It stinks, but we’re doing everything we can.”

Surely some comapny will be foresightful enough to jump onboard with Nemco!