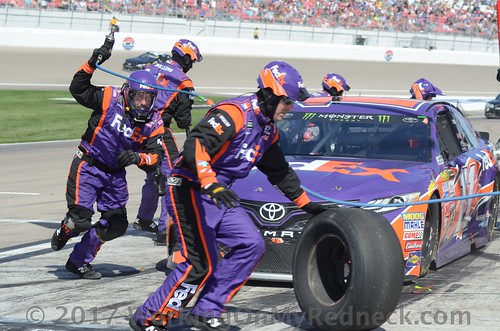 Denny Hamlin will go for the season sweep of New Hampshire on Sunday. He led 54 laps on his way to the checkered flag there in July, beating out second-place Kyle Larson by .509 seconds. Martin Truex Jr. finished third, followed by Matt Kenseth and Kevin Harvick.

The No. 11 Toyota driver enters Sunday’s race carrying a ton of momentum. He has finished in the top five in 10 of his last 13 races and has scored four consecutive top fives.

Another driver performing well right now with little fanfare is Kevin Harvick – last year’s fall New Hampshire winner. The No. 4 Ford driver has eight top-10 finishes in his last 12 starts, including a third place showing at Chicagoland last weekend where he led 59 laps.

In 33 career starts at New Hampshire, Harvick claims two wins, 10 top fives, 18 top 10s and a 12.8 average finish. He has produced a top-five result in five of his last six starts at The Magic Mile. His 10.9 average running position at New Hampshire ranks third among active drivers.

Nine of the 16 playoff drivers have previously visited Victory Lane at New Hampshire. They’ll try to channel their experience to do it again and earn an automatic bid to the second round. Kurt Busch, Jimmie Johnson, Matt Kenseth and Jimmie Johnson lead active drivers with three wins apiece at The Magic Mile. Kyle Busch, Denny Hamlin and Kevin Harvick have won at New Hampshire twice. Kasey Kahne and Brad Keselowski have each lifted the lobster in Victory Lane once at the New England track.