Event: NHRA Carolina Nationals (Round 19 of 24)

Tony Schumacher qualified 9th, lost to Kalitta in in second round.

The Charlotte winning streak for U.S. Army Racing in the NHRA Carolina Nationals came to a halt Sunday afternoon. After three consecutive wins in the opener of the NHRA Mello Yello Drag Racing Series six-race Countdown to the Championship, Tony “The Sarge” Schumacher and Antron Brown lost in the second round of the 10th annual NHRA Carolina Nationals at zMAX Dragway near Charlotte.

Schumacher, the 2008 and 2014 Charlotte winner, overcame a tough opening night of qualifying to post four consecutive solid passes aboard the U.S. Army Dragster for Don Schumacher Racing (DSR) in extremely warm conditions. His two passes in Saturday’s qualifying sessions allowed him to climb to ninth on the elimination ladder. The eight-time Top Fuel world champion knocked out Shawn Langdon in the opening round of eliminations Sunday with a run of 3.765 seconds at 325.45 mph to advance to the second round. “The Sarge” took on No. 1 qualifier Doug Kalitta for the 87th time in his career and Kalitta used a startling line advantage to best Schumacher by 0.0262 seconds (approximately 13 feet). Schumacher posted a lap of 3.791 seconds at 325.61 mph.

“We didn’t win,” said Schumacher. “I’d love to make excuses, but they beat us. That’s it. Doug left on me and out ran me. I had a really good light in the first round, so you go into that second round and I was trying to tattoo that tree. I went in quick to get firmed up and ready and he went in slow doing what he should do to slow my momentum down. Doug and that Kalitta team did a great job. The big picture is that we have a good U.S. Army car. We are finally starting to run right. Yes, we got beat second round, but the guys were ahead of us coming into the weekend also lost early. It’s going to bunch everyone up in the top six or seven. It’s tough, because we could have left here with the lead in the Countdown when you see all the other teams you are chasing go out. Unfortunately, we let that one slip away. The good news is we get to get right back at it next week with some good momentum. Honestly, the points are going to bunch up and it’s going to come down to racing. We have a really good car. A lot of guys do. It’s going to be about who can suck it up with pressure and get the job done. I like our chances with this group we have on the U.S. Army team led by Mike Green.”

Brown opened the Countdown with an eye on a third consecutive Carolina Nationals victory. The three-time and reigning Top Fuel world champion started the day with a lap of 3.794 seconds at 320.66 mph behind the wheel of the Matco Tools/U.S. Army Dragster for DSR to narrowly defeat Terry McMillen by 0.0117 seconds (approximately 6 feet). In the second round, Brown faced Clay Millican and was looking to score his 23 victory over Millican in 24 career races. Brown’s run of 3.776 seconds at 323.89 mph wasn’t enough to defeat Millican, who posted a lap of 3.754 seconds at 323.35 mph and won by 0.0054 seconds (approximately 3 feet).

“We had a good race weekend here in Charlotte,” said Brown. “Trust me, we were pushing hard trying to win. I know all these Matco Tools/U.S. Army guys feel the same way I do. It’s definitely getting us all at the level that we need to be at. When you lose a close race, it makes you hungry. You know there is going to be a lot of races like this in the Countdown. We just have to step up. The next race is only a few days away so we don’t have to wait long to get back on this horse. And our main focus is to go out there and qualify well and to race well on Sunday. That’s not going to change. We’re getting better. We all know we lost a close, close race. And we know where we need to be. We know how important and crucial these next couple of weeks are. It absolutely helps that we are going to tracks the next two weeks where we race well at. We are all going to step up and be better as a team. We are all going to do it together.”

Kalitta went on to score his first victory of the season by defeating his Kalitta Motorsports teammate Richie Crampton in the final, and with the victory, he took over the top spot in the Top Fuel standings. Brown and Schumacher will enter next weekend’s second Countdown event third and fifth in the standings, respectively.

With the first of six NHRA Mello Yello Drag Racing Series Countdown to the Championship events complete, the top-10 drivers in the Top Fuel standings are: 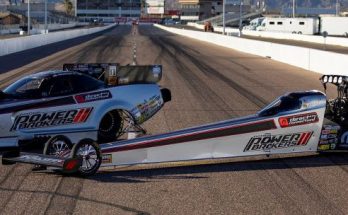 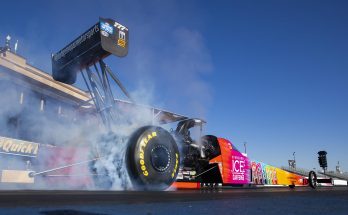 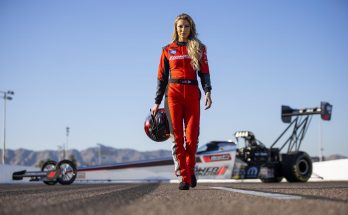