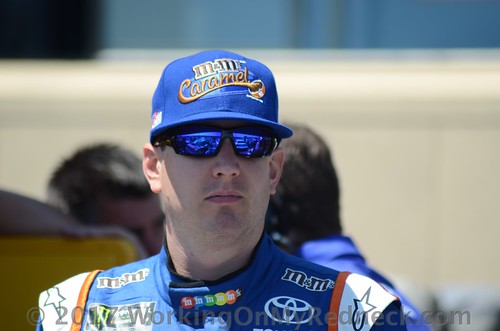 Kyle Busch can expect some second-guessing after mistakes in Sunday’s Tales of the Turtles 400 at Chicagoland Speedway relegated the polesitter to a 15th-place finish.

After winning the first stage of the race and leading all but two laps, Busch pitted under caution on Lap 83. But eight circuits after the subsequent restart on Lap 88, he brought the No. 18 Toyota to pit road for an unscheduled green-flag stop because of a loose wheel. During the stop, one of Busch’s crewman was hit with a penalty for stepping over pit wall too soon, and after the resultant pass-through penalty, Busch dropped to 30th in the running order, two laps down.

On fresh tires, Busch regained one of the lost laps on the track but never could return to the lead lap. He finished 15th as the first driver one lap down but remained fifth in the standings, thanks in large part to the stage victory and the 29 playoff points he carried into the Round of 16.

Nevertheless, Busch was clearly disappointed after climbing from his car.

“We had such a fast Skittles Sweet Heat Camry,” said Busch, who led a race-high 85 laps before his race fell apart on pit road. “It’s just disappointing that we had trouble on pit road like that. We just never had the opportunity with how the cautions fell to get back on the lead lap.

“We’ll get back to the shop and talk about it, and really all we can do is move on and put it behind us.”

Asked whether he had second thoughts about the pit crew swap, Busch said tersely, “Movin’ on.”