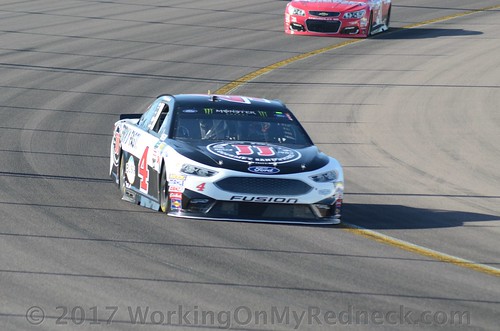 ● He reported the No. 4 Ford was loose-off early in the run.

● The Jimmy John’s Ford came to pit road for four tires, fuel and an air pressure adjustment on lap 47.

● The No. 4 teamraced to the second position by the end of the stage, then pitted for four tires, fuel and an air pressure adjustment.

● The Jimmy John’s Ford raced to the lead at the start of Stage 2.

● Harvick surrendered the lead on lap 123 to pit under green-flag conditions for four tires, fuel and an air pressure and wedge adjustment.

● The pit-stop adjustments caused the No. 4 Ford to get tight in the center of the corner.

● Harvick came to pit road for four tires, fuel and a wedge adjustment at the conclusion of Stage 2.

● Harvick raced the Jimmy John’s Ford to the lead at the start of the final stage.

● The Jimmy John’s Ford led until lap 189, when Harvick reported he was loose off the corner.

● Harvick came to pit road for adjustments under caution on lap 212.

● The No. 4 gained a position on pit road, restarting second on lap 215 and finishing third as the race went green to the finish.

● Tales of the Turtles 400 at Chicagoland is the first of the 10-race playoffs to determine the 2017 NASCAR Cup Series champion.

● Harvick gained 18 bonus points by finishing second in both the first and second stages.

● Harvick led four times for 59 laps to bring his laps-led total at Chicagoland to 432.

● There were four caution periods for a total of 21 laps.

● Twelve of the 40 drivers in the Tales of the Turtles 400 finished on the lead lap.

● Martin Truex Jr. won the Tales of the Turtles 400 to score his 12th career Monster Energy NASCAR Cup Series victory, his series-leading fifth of the season and his second at Chicagoland. His margin of victory over second-place Chase Elliott was 7.179 seconds.

Playoff Standings: (with two races to go before Round of 12):

“Our focus was to make sure that we didn’t make any mistakes today, and everybody at Stewart-Haas Racing worked hard to work on that gap between those cars, but we’ve known about that gap and feel like we’ve closed that up, and we knew that not making mistakes was gonna go a long way. We saw the 78 (Truex) make mistakes today, but they had a fast enough car to recover from that. The 18 (Kyle Busch) didn’t recover from his mistakes. I just have to thank everybody from Jimmy John’s, Busch, Ford, Mobil 1, Outback, Hunt Brothers, Morton Buildings and Textron Off Road for all they do for putting us on the racetrack.”