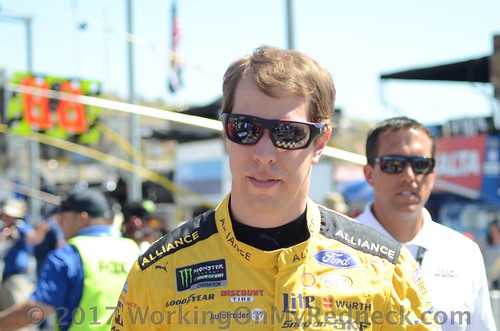 If the war of words is any indication, the advent of the Monster Energy NASCAR Cup Series Playoffs brings out the persnickety side of the drivers involved.

In a Friday tweet, Brad Keselowski bemoaned what he perceives as Toyota’s performance advantage over the Fords and Chevrolets in the field. That earned the driver of the No. 2 Team Penske Ford a lot of return fire from the Toyota camp. After qualifying second to Joe Gibbs Racing teammate Kyle Busch, Toyota driver Denny Hamlin couldn’t resist a foray into the fray.

“I’d like to know what Toyota is paying Brad, because he is their best spokesman,” Hamlin quipped. “I need more money for my PSA. If you’re shopping for a midsize sedan, get the unfair advantage – get a Toyota.”

Indeed, Camry drivers led both Saturday practices, with Martin Truex Jr. topping the morning session and Kyle Busch recording the fastest lap in Happy Hour. But there was a good mix of car makers on the speed chart.

With the heat thermostat getting cranked out in “The Playoffs”, stay tuned for another chapter of “As The Twitter Flies”, we have not seen the last chapter yet!