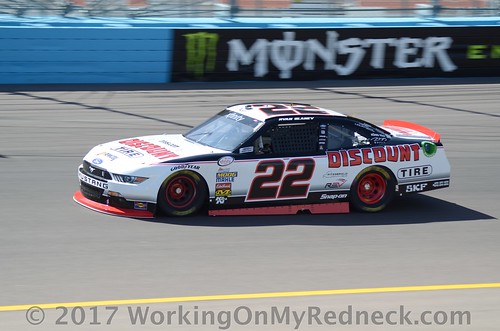 Recap: Ryan Blaney and the No. 22 team finished a disappointing 26th place in TheHouse.Com 300 after late race contact took Blaney out of winning contention. After starting the race from the fourth position, Blaney established himself as one of the top contenders as he quickly moved into second place. Blaney’s Mustang showed tremendous short run speed but by the end of the 45 lap segment, he fell back to the fourth position battling a very loose racecar. Crew chief, Brian Wilson called Blaney down pit road under caution to tighten up the Ford. As the second stage began, the third-generation driver would restart the race from the fourth position on lap 52 and the top four cars began to separate themselves from the rest of the field. By lap 70, Blaney would make the pass for the third position where he would remain until the end of the second 45 lap stage. Still battling a loose racecar, Wilson continued to make adjustments under caution so the 22 Ford could race with the leaders on the long run. During the second caution, Blaney suffered a pit road speeding penalty and would restart the third and final segment from the 17th position. The 23-year-old driver showed his determination to get back to the front, racing his way to the third position by lap 120.  On lap 149 the race would be slowed and gave the 22 team another opportunity to work on the Mustang under the yellow flag. Blaney would restart third on lap 154 and take over the race lead on lap 155 and extend his lead to over two seconds on the field before another caution fell with 20 laps to go. Wilson elected to pit with the rest of the field pitting behind them. Blaney would restart from the second position with 15 laps to go. On the restart Blaney suffered damage racing for the second position, the contact was bad enough he would need to pit for a tire rub. Blaney and the 22 team would finish in the 26th position two laps down by the end of the race. The 22 team still leads the NASCAR owner point standings by 102 markers.

Quote:  “We had a really good Mustang. We weren’t good at all early. We were terrible loose early. They did a great job getting us tighter throughout the day to compete. I sped on pit road after the second segment which was my fault. We drove back up to third and then got the lead on a restart. I thought our car was really good at that point. Then that last caution we came in and got tires and we lost a couple spots on pit road which hurt and made us line up second. The 20 got in there three-wide and we kind of got run into I guess. It stinks. We didn’t have a winning car at the beginning of the race but then we had the car to be able to win at the end of the race. That is really hard to get. It is all you can ask for. We should have been in victory lane. We were the best car for 25-30 laps. That part is unfortunate.”