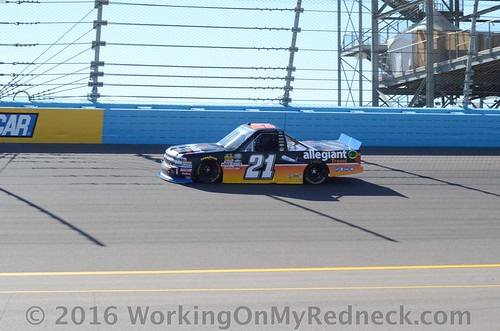 Ben Rhodes was happy just to squeak into the final NASCAR Camping World Truck Series Playoff berth—by the skin of his teeth.

Sauter passed regular-season champion Christopher Bell for the lead on Lap 123 of 150 and drove away to win Friday Night’s TheHouse.com 225 by 2.005 seconds over Chase Briscoe, who passed Bell for second on Lap 136.

The race within a race between Rhodes and polesitter Ryan Truex was much closer. Fighting for the final position in the playoffs, Truex won the first 35-lap stage and finished fourth behind Bell at the checkered flag. Rhodes came home sixth and snagged the last Playoff berth on a tiebreaker.

With the Playoff spot decided by best regular-season finish, Rhodes won on the strength of his second-place run at Pocono Raceway, where he beat Truex to the finish line by a quarter of a second.

Sauter won for the first time at Chicagoland Speedway, the second time this season and the 15th time in 214 NASCAR Camping World Truck Series starts.

“This truck was unbelievable,” said Sauter, who stayed on the track during a caution late in the first stage and had to battle back through the field. “We had a great truck yesterday (in practice). I was worried with the Cup guys and the XFINITY guys here the track might change a little bit.

Rhodes edged into the Playoffs despite a performance he considered sub-par. A violation for an uncontrolled tire during a pit stop under caution on Lap 38 sent him to the rear. Later in the race, Rhodes’ No. 27 Toyota developed a left rear tire rub after contact with the No. 88 Tundra of Matt Crafton.

“Man, I still can’t believe it,” Rhodes said. “They gave me the hat (for playoff qualifiers), and I’m like, ‘Are you sure this is ours?’ We were tied, and we have the tiebreaker. I can’t believe it. The truck… all night we struggled ever since we unloaded.

“This has definitely our worst performance overall, and it couldn’t have come at a worse week to do it. But I’m glad we’re in, and overall, everything worked out for us.”

Truex expected a close battle for the last Playoff spot and was understandably disappointed to be on the short end of it.

“It’s tough, but it’s racing,” Truex said. “We did everything we could do aside from win. We just didn’t have the speed for the 29 (Briscoe) and the 21 (Sauter). I was good on restarts. I felt like that was my best shot, so I was really, really aggressive on restarts…

“I had a feeling it would come down to this. It’s been so close this whole year.”

Check out the unofficial results of TheHouse.com 225.

TIL NEXT TIME, I AM SITLL WORKING ON MY REDNECK!