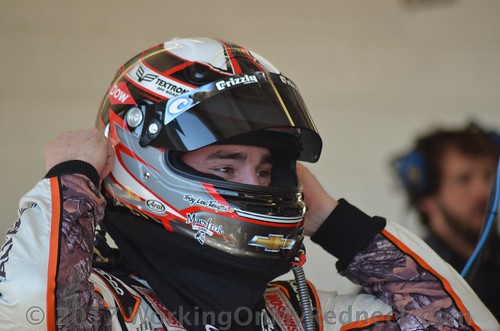 One of most widely-quoted clichés from mob movies is “Keep your friends close; but keep your enemies closer.”

In Austin Dillon’s case, however, the driver of the No. 3 Richard Childress Racing Chevrolet might want to stay as far away from Danica Patrick as possible. Repeated contact last Saturday at Richmond between Dillon’s car and the Patrick’s No. 10 Ford sparked a rivalry that has the potential to carry over into the Monster Energy NASCAR Cup Series playoff, which starts Sunday afternoon with the Tales of the Turtles 400 at Chicagoland Speedway.

One very important fact to remember for the next few races–Dillon is a playoff driver, Patrick is not!

Dillon and Patrick were battling for position at Richmond. Dillon was aggressive in his attempts to pass the No. 10 Fusion. Patrick defended her position just as aggressively, and the cars touched several times before Dillon gained the spot. Patrick answered with a hard shot to Dillon’s rear bumper, knocking Dillon’s No. 3 up the track. Dillon responded with a nudge to Patrick’s left rear quarter and sent her spinning.

“She punted me and I punted her back, but she spun out,” Dillon said. “I saved mine when she punted me.”

Dillon is an underdog in the Cup Playoff, and the prospect of a revenge-minded Patrick settling the score in one of the playoff races is a further complication. Having announced she will not return to Stewart-Haas Racing next year—leaving her future in Cup competition uncertain—Patrick has little reason to restrain herself, should the opportunity to get even arise.

“I will talk to her at some point and I am sure we will be OK,” Dillon said. “She could have retaliated at Richmond. I pulled right in front of her to allow her to do it, but nothing happened.

“I was ready to get out of the Richmond race because we sucked so bad. I was like, ‘Man, just take me out if you want,’ but she didn’t do it. I didn’t think she was that mad.”

And the drama continues!