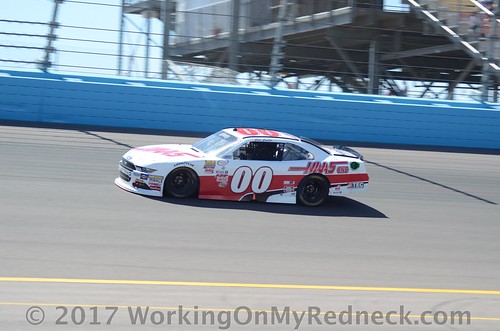 ● Custer kept his No. 00 Haas Automation Ford Mustang inside the top-five throughout Stage 1 and ran as high as third.

● Custer radioed to crew chief Jeff Meendering that he was tight to the center and over the bumps in turns three and four.

● At the conclusion of the stage, Custer pitted for four tires, fuel and air pressure adjustments. He gained one position on pit road.

● Custer pitted for four fresh tires, fuel and more air pressure adjustments at the end of the stage.

● During the race off pit road, Erik Jones, driver of the No. 20 car, earned a speeding penalty, handing the lead to Custer.

● Custer held the lead for the first 38 laps of the final stage.

● During a lap-181 caution, Custer pitted for four tires, fuel and air pressure adjustments. He restarted in the fourth position.

● Custer was caught in traffic on the restart. With nowhere to go, he made contact with the rear of the No. 22 car of Ryan Blaney.

● Custer’s Haas Automation Ford Mustang suffered light nose and side damage as result of the contact.

● After pitting to assess and repair the damage during a caution on lap 190, Custer restarted in the 16th position and rallied to his 13th top-10 of 2017.

● Custer led four times for 41 laps, the second-highest total in the race.

● Custer was the highest finishing rookie and XFINITY Series regular in Stages 1-2.

● Custer will start the seven-race playoffs as the eighth seed among the 12 eligible drivers.

● Justin Allgaier won TheHouse.com 300 to score his fifth career XFINITY Series victory, his second of the season and second at Chicagoland Speedway. His margin of victory over second-place Kyle Larson was 1.772 seconds.

“I was happy with that today. That is the best speed we’ve had all year in the Haas Automation Mustang. It was really good and a huge momentum builder. That was probably the most fun I’ve ever had in a stock car, doing those crossover passes. I have respect for him (Kyle Larson) racing me clean there. That was a lot of fun. Erik (Jones) was just pushing it. I think he knew he was probably in a bad spot and tried to keep it in the gas and forced Blaney in the wall. I was right behind it and couldn’t go anywhere. That is how it goes, though.”