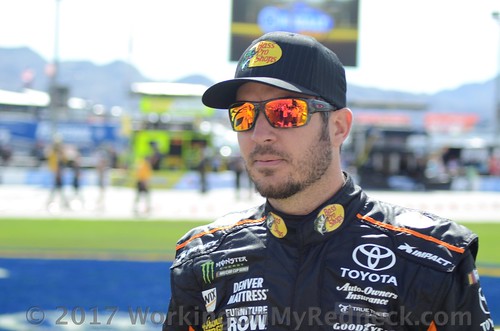 The No. 78 Furniture Row Racing driver will try to start the postseason with a victory in Sunday’s Tales of the Turtles 400 at Chicagoland Speedway – a race he won last year.

Truex is tied with Kyle Larson for the series wins lead with four victories. Three of those checkered flags have come at 1.5-mile tracks – the distance of Chicagoland Speedway.

“No question, we like the 1.5-mile tracks, but we have also been strong at other types of tracks too, including a road race win at Watkins Glen,” Truex said. “You can’t look ahead or wallow in the past, you have to have 100 percent focus on what’s in front of you, and that would be Chicagoland Speedway.”

In 11 career starts at Chicagoland, the New Jersey native claims one win, three top 10s and a 14.9 average finish.

Due to his lofty playoff point total of 53 – accumulated via his four wins, 18 stage wins and regular season championship – Truex  sits 48 points ahead of Kasey Kahne on the cutoff line entering Sunday’s race.

“Obviously I think it’s a good thing that we have them (playoff points), and I think we could have used them last year with the way the playoffs worked out for us,” recalled Truex. “We need to focus on running as strong as we possibly can and keep the momentum going that we’ve had lately.

“Cars have been just lightning fast and teams have been doing a great job. We’ve got a few little things to work on, but all in all, I feel like we’re definitely one of the strongest teams. Hopefully we can just continue to perform at the level we’re capable of, and we don’t need those bonus points, but it’s going to be nice to have them, that’s for sure.”

The playoffs begin in earnest this weekend at Chicagoland Speedway.