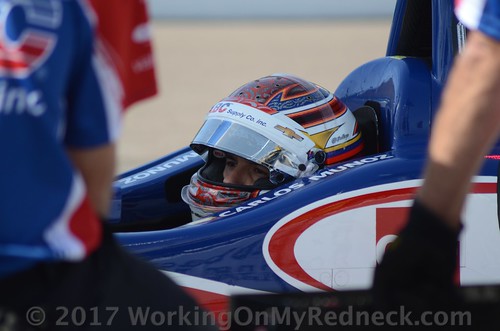 A.J. Foyt’s ABC Supply team switched to Chevrolet this season with 25-year-old drivers Carlos Munoz (No. 14) and Conor Daly (No. 4). Munoz finished 10th and Daly 11th in the INDYCAR Grand Prix at The Glen.

Carlos Munoz on Sonoma Raceway: “Sonoma is really different from Watkins Glen. We’re arriving at a track that doesn’t have a lot of grip from a track that has a lot of grip so it’s going to be a really weird feeling in the beginning –at least the first couple of laps in the car. Sonoma is a really difficult track because it changes so much from the morning to the afternoon. I think you have to be competitive in the heat because qualifying is at that time and also the race, so I think you have to prepare a car for the heat. It’s a double points race and our goal is to be the second Chevy team in the championship which I think we are close to making that happen. It’s been a tough season especially in the beginning but we have improved a lot over the season. Race by race, I think we’ve been really good—we’ve been in the top 10s in a few races–so I’m looking forward to finishing the season on a high note. Our team worked really well the whole year even though the circumstances weren’t the best but I think we will finish strong.” 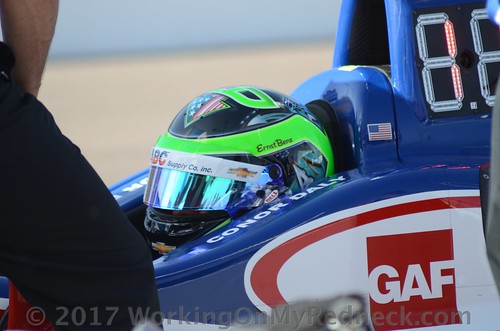 Conor Daly on Gateway Motorsports Park: “Sonoma is a beautiful venue and a terrific place to finish off the season.  Double points races have yet to go well for me but obviously we plan on turning that around!  We’ve had a string of pretty good races going and there is no reason why we shouldn’t be able to keep the results coming.  I’m very happy to have an extra test day before the weekend because each time this year we’ve had good races at places, we’ve tested day at those tracks before the race weekend.  The more information we can have before qualifying, the better.”

On what it takes to win a championship: “I don’t know when you win one, you want another. I guess you get hoggish and you don’t want to give up. You’ve got to have the will to want to win. Anytime I ran second, third or fourth, I couldn’t wait to race them the next week and try to beat them. That was my goal and the way I was in racing in my whole career. I didn’t care what I was in.”

On 1964 [won 10 of 13 races, and every race he finished]: “It was a great year and was a lot of fun. The first race I lost that year, I drove for Ford and the transmission went out on the first lap and I was very disappointed. I guess I was trying to be a hog that year and everything worked my way. I had a great crew and George Bignotti was a great mechanic. What else could you ask for? I played a little part in it.”

On which championship stands out: “My first one [1960] where I had to beat Rodger Ward, I think I had to win two out of the last three races so that one really stood out. He was a very hard man to beat and he was such a great driver on dirt. I won Sacramento and then Phoenix and won the title.”

On his toughest championship: “The toughest one had to be in 1967. I think with three races to go, all I had to do was finish the races to win the championship, but it seemed like everything was going against me at the end of the year. In the last race at Riverside, California, all I had to do was finish so I was being real cautious and two cars spun in front of me and I went off the course to miss the wreck. Then this guy came across the course in the dirt and hit me in the infield. I think it was Al Miller. I couldn’t believe it! So I had already talked to Roger McCluskey earlier and he said ‘If something happens and you fall out, I’ll bring my car in and give it to you.’ It was already planned. I drove some races for Lindsey Hopkins [1962], so we were all good friends but it was awful nice of them. I had to run all the way back to the pits to tell Roger to come in and then I had to get in the car and I forgot where I finished but I finished pretty good [fifth].  I beat Mario Andretti by 7 or 8 points or so. That had to be the closest one.

“Then they made a rule that to win the championship, you had to be in your own car, you couldn’t drive somebody else’s [after starting the race in your own car] and get the points. They made a lot of rules for me. I won races using Firestone and Goodyear tires and then they came out with a rule that you had to have the same tires all the way around. It takes the fun out of it. In the 500 at Ontario, Jack Starne, my chief mechanic, said ‘Boss we’re running low on fuel, we won’t have enough.’ I told him to put 10 gallons of water in there because water and alcohol mix. It will take some of the horsepower away but I was outrunning everyone so bad, I didn’t need the horsepower, I just needed to finish. After I won, they made a rule that you couldn’t add anything to your fuel during a race. I’ve had a lot of rules made for things I did.”

On who has the best chance to win this year’s title: “This race is double points so if I have to pick one, I know Dixon will be up there running so don’t get me wrong, but if I had to pick one, I’d say Newgarden’s got a good chance.”

On double points: “I don’t really care for it. It’s like some people are ahead of us in points because they got their points at Indianapolis and some for qualifying there. I don’t like it. It’s a gimmick. A race is a race and none should be double points because you could be way out in the lead in the championship and you blow a motor or blow a tire or someone runs into you and you lose the championship. To me, that’s not a true champion. If you’re lucky you’ll be there and if you’re not, you won’t. I think all the races should pay the same points and that’s it.”

On Scott Dixon (closing in on his record): “It’s possible for him to break my record. Like I’ve said about Indy, it wouldn’t surprise me to see someone win Indy five, six or seven times. The equipment we run today is 100 percent better in staying together and the same for the championships. You used to have to overhaul your own motors and put your own motors in and now you’ve got the factory doing all that for you. Even though you win 10 championships, the factory won the championships for you because you didn’t have to baby the car. Before, we had clutches and we had to shift manual, now it’s all automatic. It’s different racing now. Even back in my day compared to the old days. I take my hat off to those people that won the 500 and won championships. Who can say in their day that I could even run close to them? I know in my time I was pretty good. Like some of the boys racing now are pretty good but to me, it seems easier than it used to be, and it’s like the people before me had it a lot harder than I had it. You’re trying to compare apples and oranges. It’s really hard to compare.”

Past Performance: At Sonoma Raceway, Carlos Munoz’s best start is 9th in 2014 and his best finish is 12th in 2015. In Conor’s only start at Sonoma, he dropped out with exhaust issues after 36 laps after starting 21st which is where he finished. The Foyt team’s best start of 13th camewith Takuma Sato in 2013 and its best finish of 4th was also with Sato in 2014.

ABC Supply local account Sierra Roofing & Solar, with its headquarters in Dublin, Calif., will be featured on Carlos Munoz’s No. 14 ABC Supply Chevrolet. Guests will receive the VIP treatment this weekend along with a Meet and Greet with Munoz.

ABC Supply local account All Rite Roofing, Inc., headquartered in Yuba City, Calif., will be featured on Conor Daly’s No. 4 ABC Supply Chevrolet. Guests will receive the VIP treatment this weekend along with a Meet and Greet with Daly.

ABC Supply celebrates its 35th anniversary this year. The company was founded in 1982 by Ken and Diane Hendricks with just three stores. The company now has over 700 stores and topped $7 billion in sales in 2016. ABC Supply began sponsoring the AJ Foyt Racing team withthe 2005 Indianapolis 500. The company has leveraged its involvement by entertaining over 84,000 associates and customers over the past 12 racing seasons. The company will entertain over 530 guests this weekend.