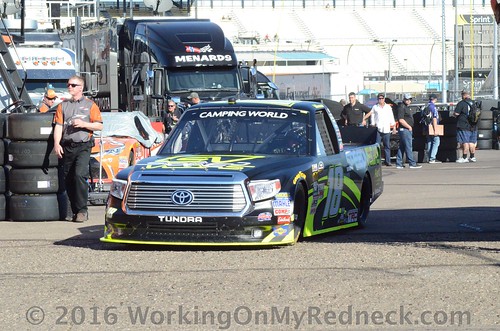 While Michigan Avenue in downtown Chicago is known as the “Magnificent Mile,” Noah Gragson is hoping Chicagoland Speedway in Joliet will be his “Magnificent Mile-and-a-Half.” Gragson needs a win Friday night to make the NASCAR playoffs in his rookie season. Winning at Chicagoland would be truly magnificent.

Gragson has never raced at Chicagoland before, but has shown improvement throughout the season on the many 1.5-mile tracks on the NASCAR Camping World Truck Series (NCWTS) schedule. After having clutch issues at Kansas Speedway in May resulting in a 28th-place finish, Gragson has not finished outside the top 10 on a 1.5-mile track. In fact, he scored his second top-five finish of the season at Kentucky Speedway in July. He will get some extra experience at Chicagoland on Thursday running the ARCA Racing Series event for Venturini Motorsports.

He has momentum on his side coming off his best career NCWTS finish (second) at Canadian Tire Motorsport Park two weeks ago, and a trip to Victory Lane last weekend when he returned to The Bullring at Las Vegas. In front of his hometown crowd, Gragson passed the points leader on a restart with nine laps remaining in the 50-lap NASCAR Super Late Model race and held on for the checkered flag. Gragson climbed the fence to celebrate after earning his 14th career win at the 3/8-mile track.

Taking the same Switch Tundra he finished fifth with at Kentucky, Gragson would like to do more fence climbing on Friday night. With 47 points separating him from eighth place, the final cutoff for the playoffs, he is in a must-win situation. He has his eye on the prize and knows what he needs to do. He has 150 laps to achieve his goal and have a magnificent night at Chicagoland.

What is your approach to the final races of the season?

“I definitely have one goal and that is to win races. Thankfully the team I’m with, Kyle Busch Motorsports, provides fast Toyota Tundras week in and week out. I’m looking forward to the next few races coming up this month. I’ll be going home to race at Las Vegas at the end of the month which I’m really excited about. I have one more opportunity to get into the playoffs at Chicagoland this weekend if I can win the race.”

How do you prepare for such an important race when you have never raced at this track before?

“I’ve practiced at the simulator at TRD (Toyota Racing Development) and been working with my crew chief, Marcus Richmond, to prepare. Preparation is going to be key for this race so we’re going to be watching a lot of film, trying to stay focused all weekend and not make any mistakes. I’ve never been to Chicagoland so it will be tricky, but as long as I can do my job and be focused, that will be the main goal. Running the ARCA race on Thursday will be good to learn the track, but the truck will be different aero-wise and it will be harder to pass in the truck race.”

How do you feel about your rookie season in the NCWTS so far?

“I’m not going to lie, it’s been harder than I thought it would be. Moving up into the Truck Series is very different than any other time I’ve moved up to the next level in racing. The jump from Legends cars up to the NASCAR K&N Pro Series wasn’t that bad, but moving up to the Truck Series is a whole different kind of talent. Racing against veterans like Johnny Sauter, Matt Crafton and my KBM teammate Christopher Bell, they have a lot of experience and being a rookie, the mile-and-a-half tracks are very tricky because of the aero and dirty air sensation. Things are constantly changing with the balance of the truck. It’s been kind of a rude awakening, but I’m very fortunate for the opportunity to be in the position I am. It’s been a year of learning and I have a little bit more to learn, but I feel we can contend for wins in the coming races.”

How much have you seen Noah progress on the intermediate tracks this season?

“From day one he’s had a lot of speed off the trailer and running by himself, and he’s definitely improved on restarts which is key. He kind of struggled early in the season on restarts and now he’s getting better at it every week. He’s definitely getting better with running in traffic, making passes and executing when it’s time to go and managing the dirty air. Hopefully this weekend we can capitalize on that and execute.”

Richmond has two top-five and four top-10 finishes in seven starts as a NCWTS crew chief at Chicago. His teams’ best finish was third in 2015 with driver Timothy Peters.