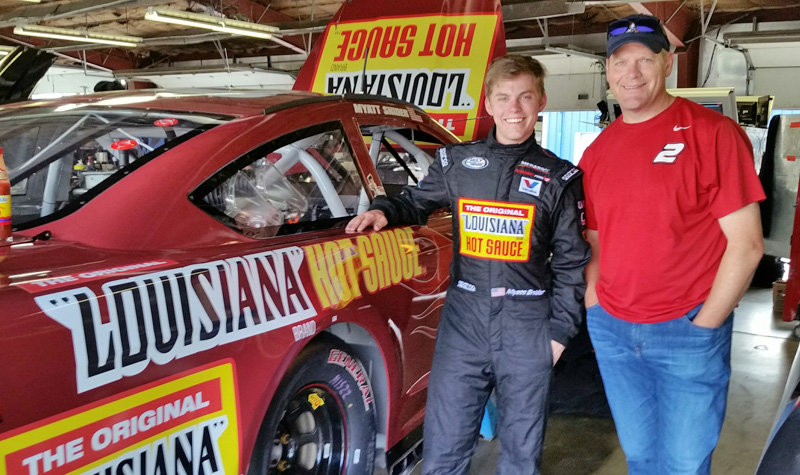 This week, the NASCAR Camping World Truck Series (NCWTS) will head to the Midwest for the last race of the regular season at Chicagoland Speedway in Joliet, Ill.  After not being behind the wheel of the No. 51 Louisiana Hot Sauce Toyota Tundra in over two months, 22-year-old Myatt Snider will look to heat things up in his fourth start of the season for Kyle Busch Motorsports (KBM) in the NCWTS.

Luckily for Snider, he has prior racing experience on the 1.5-mile track in Illinois. Snider made his track debut in the ARCA Racing Series in September of 2016. He started that race from the 15th position and posted a 22nd-place finish after a mechanical issue ended his day early. The rookie hopes he can take that experience and apply it this weekend as he looks for his first win in the Truck Series.

Snider made his 2017 NCWTS debut at Daytona International Speedway in February, scoring a top-10 finish to start the season and was in place to grab a second top 10 at Texas until a late-race spin resulted in a 16th-place finish. At Kentucky Speedway, he started the race from the sixth position, led four laps and ultimately crossed the finish line 16th. After Chicagoland, Snider can be seen behind the wheel of the No. 51 Tundra in four more races in the 2017 season, including Las Vegas (Nev.) Motor Speedway Sept. 30, Talladega (Ala.) Superspeedway Oct. 14, Texas Motor Speedway Nov. 3 and Homestead-Miami (Fla.) Speedway Nov. 17.

When Snider straps in to race Friday night under the lights, he will once again have Louisiana Hot Sauce on the hood of his No. 51 Toyota Tundra. Louisiana Hot Sauce is made in New Iberia, La. Over the years, the company has expanded, but they have stayed true to a promise made over years ago to create a perfectly balanced sauce that is “not too hot, not too mild.”

Snider is eager to climb back behind the wheel and is looking to have a spicy weekend in his No. 51 Louisiana Hot Sauce Toyota Tundra. When the engines start and the green flag drops, Snider will have 150 laps between him and finding Victory Lane for this first time in the Truck Series.

What are you looking forward to and how have you prepared for Friday’s race at Chicagoland Speedway?

“I’m really excited to be back in the No. 51 Louisiana Hot Sauce Tundra this weekend. I’ve been doing all I can to prepare – watching film and talking with the guys on the team about the race track. I ran the ARCA race there last year and although my race ended early that night, I know that experience on the track is something I can take with me for this weekend. It’s going to be a fun one and hopefully we can bring home the win when it’s all said and done.”

Myatt Snider is back in the No. 51 Tundra this week, how prepared are you for Chicagoland Speedway?

“It’s been a few months, but I’m looking forward to having Myatt (Snider) back in the No. 51 this weekend. We have two practice sessions on Thursday to work on the setup of the truck and getting our Louisiana Hot Sauce Tundra ready to race. Everyone on the No. 51 team has worked hard to prepare a fast Tundra and hopefully we can find ourselves in Victory Lane Friday.”

KBM-046: The No. 51 Louisiana Hot Sause team will race KBM-046 for Friday’s Chicagoland 225. Owner-driver Kyle Busch drove this Tundra earlier in the season at Michigan International Speedway where he started 10th, led 47 laps and finished third.