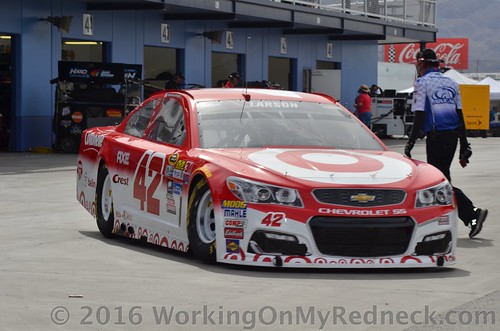 A caution on Lap 397 of a scheduled 400 in Saturday night’s Federated Auto Parts 400 turned what looked like a coronation for Martin Truex Jr. into an unexpected overtime victory for Kyle Larson, as the field of 16 drivers was set for the Monster Energy NASCAR Cup Series Playoffs.

Truex, the regular season winner, had a comfortable lead over Larson when Derrike Cope brushed the outside wall with three laps left in regulation. Larson won the race off pit road after the lead-lap cars pitted for tires, and the driver of the No. 42 Chip Ganassi Racing pulled away from a restart on Lap 403.

One lap later, contact between the Toyotas of Truex and Denny Hamlin sent Truex’s No. 78 Camry rocketing into the Turn 1 wall, and the race ended under caution with Larson in the lead and Joey Logano, who needed a win to qualify for the postseason, rolling home in second place after making the most of a restart from the ninth position.

“I’ve got the greatest team out here and definitely the best pit crew,” Larson said. “That showed tonight. I can’t thank those guys enough. They were money all night long to gain spots. This win is a huge congrats to them. The Target Chevy was pretty good all night. The No. 78 (Truex) was definitely the best, but I thought I was second best for most of the runs.

“It came down to the last restart there, and I got a good start. I spun my tires pretty bad, and I was a little nervous, but we cleared him (Truex) into (Turn) 1, and I was pretty excited about that. I’m really pumped for the playoffs. We’ve got a great shot at the championship, I feel like, this year. So I’m looking forward to it.”

Larson’s victory ensured playoff spots for three drivers fighting for berths on points – Chase Elliott, Jamie McMurray and Matt Kenseth. The night was particularly tense for Kenseth, who damaged the nose and radiator of his car beyond repair coming to pit road on Lap 255.

An ambulance stopped on the apron near the pit road entrance forced drivers to take evasive action, and Kenseth’s car plowed into the rear of Clint Bowyer’s Ford, doing irreparable damage. Kenseth fell out of the race after 257 laps and had to wait until Larson’s victory eliminated the possibility of another unique winner – a circumstance that would’ve eliminated Kenseth from the playoff.

Logano ran one spot short of the victory he needed to make the playoff, after his April win was encumbered because of a penalty for a rear suspension infraction.

“Yeah, you said it, came up a little bit short overall,” Logano said. “Yeah, it stings a little bit. Last time we were sitting here after a race, it was after a win, and this time it’s after a second, which overall if you look at our Richmond (record) for a season with the two races, you’d say, that’s pretty good, a first and a second.

“But just overall, obviously it stings to come up one spot short and not be able to get into the playoffs. It is what it is. It’s reality, and we will move on.”

Dale Earnhardt Jr. ran consistently in the top 10 throughout his final run at Richmond in the No. 88 Hendrick Motorsports Chevrolet but fell to 13th in the melee of the final restart.

Ryan Newman came home third, followed by Kurt Busch, Hamlin and Erik Jones, who was trying to force his way into the playoff with a victory. Jones ran as high as third but lost positions on pit road on his last two stops and didn’t have the speed to make up the difference.

Elliott finished 10th and McMurray 14th. Based on those runs, both drivers would’ve secured playoff berths after Kenseth fell out, even if the race had produced a new winner.

Check out the unofficial results of the Federated Auto Parts 400 at Richmond.