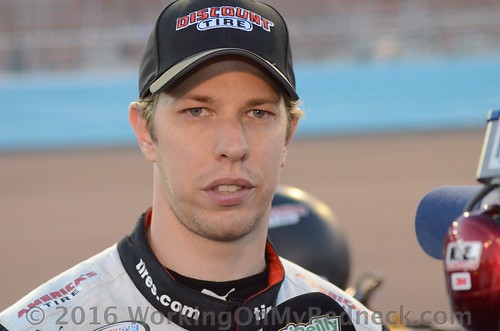 Recap: Fans were treated to a classic NASCAR XFINITY Series battle between Brad Keselowski and Kyle Busch in Friday’s night’s Virginia 529 College Savings 250 at Richmond Raceway. In the end, Keselowski was able to drive his No. 22 Fitzgerald Glider Kits Ford Mustang to Victory Lane for his 36th career series victory. After starting the race from the third position, Keselowski quickly established himself as one of the top contenders for the win as he quickly moved into second place. He assumed the lead at lap 47 and held it until a caution flag at lap 53 allowed other competitors to visit pit road for fresh Goodyear tires. Those tires made the difference on the restart as Keselowski fell to fifth at the end of the first 75-lap stage. As the second, 75-lap stage began, Keselowski and Busch began to separate themselves from the rest of the field. Keselowski raced his way to the back bumper of Busch and made a late-stage pass to score his eighth stage win of the season. The 2010 series champion began the final, 100-lap stage from the third position and he immediately began to put the pressure on Busch to use his equipment harder than he may have wanted. As a result, Keselowski moved back to the lead at lap 235 and held on for the victory. The win extended the team’s lead in the NASCAR owner point standings to 115 markers.

Quote: From my view that was one of those race wins that was extremely personally gratifying. To know you are probably not as good as someone on the short run and just try to wear them down every lap and knowing that if you can get a long run you’ve got a shot and it and we did – we got a long run and I still had to make the right moves with the Fitzgerald Glider Kits Ford Mustang. It was a grinder, that is what that race was. A grinder in a good way. I think it shows the beauty of having the stages with the short and long runs because you see the races really just break apart like that one did where someone is good on the short side and someone is good on the long side. It is also part of the beauty of this track. You really have to focus in on being smooth and smart with how you use your car and manage it. That makes for passing at the lead at the end. It was really a thriller of a race at the end.”