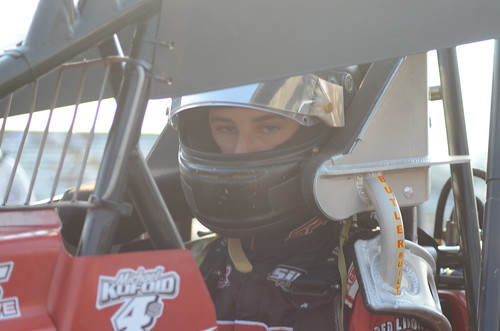 Michael “Buddy” Kofoid is just 15 years old, a high school student in Penngrove, CA.  On most summer weekends you will find him driving a 360 C.I. winged sprint car in excess of 100 mph!  This young man cannot even drive a car legally on the roads of CA, yet he not only is he racing a 700 hp. race car on many of the dirt tracks of Northern California, but he is beating drivers twice his age!

Such was the case Wednesday evening on the first night of The Gold Cup Race of Champions at Silver Dollar Speedway in the town of Chico, CA.  Kofoid strapped into his earth shaking, mud throwing, rocket ship of a race car and put on a racing clinic.  It could have been listed on the Chico State student catalog as “sprint car racing 101”!

With a great qualifying run to start off the night, he was able to start on the pole for his heat race.  When the green rag dropped on his heat race, Buddy got down hard on “the loud pedal” and showed the rest of his competitors the fast way around Silver Dollar Speedway.  He led his heat race flag to flag!

Later in the evening Kofoid was to start on the pole for the dash.  The dash consisted of the eight cars that finished first and second in the four heat races, and how they finish the dash determines the first eight starting spots for the feature.  As Kofoid led them to the green flag, once again, he launched first and sped off to a ten car length lead from start to finish!

The dash win would put Kofoid on the pole for the winged 360 feature.

Looking back the evening was beginning to resemble the movie, Ground Hog Day.  The first two races, his heat and the dash, were carbon copies of each other.  Moving forward, when the green flag flew for the main event Kofoid, once again, “let the big dog eat”!  By the time that Buddy had backed his sprinter into turn #3, he had started to pull away from the pack, not too far but far enough to give himself some breathing room.  Through the first 17 laps the distance back to second place remained constant, about 8-10 car lengths.

On lap 18 the first of several closely spaced yellow and red flags flew.  Time after time, the second place car, Michael Faccinto, Bud Keading and Willie Croft (all wily veterans) tried to steal the lead away from Kofoid, but all were unsuccessful each and every time.  On the last of the five restarts, lap 22, Buddy had a side-by-side battle for a couple of laps with Bud Kaeding, but dispensed with his challenge and went on to plant the Kofoid flag in Victory Lane!

If you live on the West Coast you need to keep your eye on this young man!  Michael Kofoid is an immensely talented young gun that is about to begin making his presence known when he unloads his sprinter at the race track.  It will not be too long before the comparisons with Kyle Larson will begin to be bantered around by sprint car fans that are in the know!