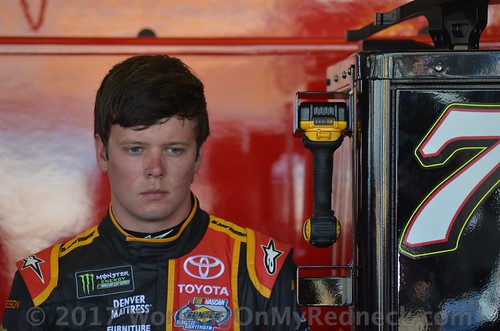 Furniture Row Racing’s No. 77 SiriusXM team needs a victory Saturday night at Richmond (Va.) Raceway to make the 2017 NASCAR Cup Series playoffs and driver Erik Jones believes his team has created the perfect situation to do just that.

The Federated Auto Parts 400 at the 0.75-mile oval is the final race of the 26-race regular season and the final opportunity for Jones & Company to achieve one the rookie driver and team’s goals: earn a spot in the 16-team 10-race playoffs.

“The SiriusXM Toyota team is really strong right now,” said Jones. “They’re working really hard, bringing great cars to the race track. We’ve known that we’ve needed to win for the last month or so and we’ve had strong race cars every week since then. We’ve had a great string of top-five and top-10 finishes but we haven’t quite got the job done.

“Running well and getting top 5s and top 10s is good for me and good for the team. It boosts our confidence up to the level it needs to be and I feel like the last three races we’ve really shown what we can do and where we can run. Now we just need to capitalize on it.”

At Richmond in April, the No. 77 Toyota was caught up in a wreck just four laps into the race and Jones was credited with a 38th-place finish. Despite that early exit, Jones feels confident headed into the final race of the regular season.

“We’ve got one more shot at it at Richmond and I know we’ll bring a good race car there,” stated Jones. “We were fast there in the spring but, unfortunately, got caught up in a wreck early. Richmond is a place where I have a lot of experience and I feel more and more comfortable every time we go there. Hopefully, we can run well and take this momentum from the last three races and turn it into a win.

“Richmond can be wild so I’m sure it will be exciting. Hopefully, we’re not too much of the excitement. I’d be fine with just being in Victory Lane … excitement at the end of the night.”