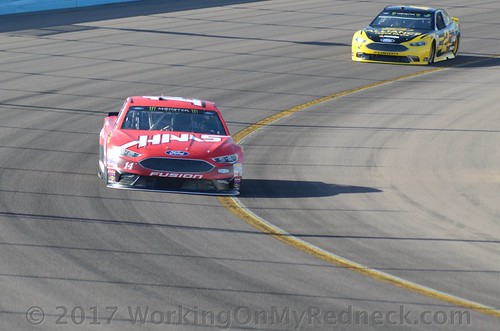 Point Standing: 11th (643 points, 357 points behind the leader and 91 outside of the championship cutoff)

● Reported engine issues while running slow during the race’s first caution on lap 16.

● Bowyer stalled on pit lane before the safety truck pushed the racecar to the garage.

● After inspection in the garage the No. 14 team retired the car from the race.

●  Although 11th in points, Bowyer remains 17th in the NASCAR playoff standings, trailing 16th place by 91 points. He will need to win Saturday night’s regular season finale at Richmond (Va.) Raceway to make the 16-driver playoffs.

●  Denny Hamlin won the Southern 500 to score his 31st career Monster Energy NASCAR Cup Series victory, his second of the season and his second at Darlington.

●  Martin Truex Jr. clinched the regular-season championship by winning the first and second stages of Sunday’s race. He owns a 107-point lead over Kyle Busch as the NASCAR Cup series heads to Richmond for the regular-season finale.

“It just blew up. It’s a pretty inopportune time to have it happen, but it’s never a good time. Doug Yates and all the guys over at his shop do such a good job of bringing us reliable, good horsepower, and it was just my time. It was my turn, and there isn’t much you can do about it.”