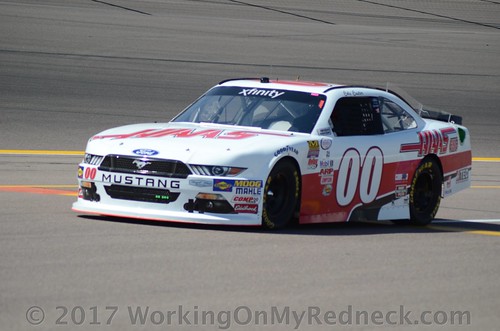 ● Custer jolted his Haas Automation Ford Mustang to second on the initial restart before a caution on lap one slowed the race.

● On lap 27, Custer noted tight-handling conditions, ultimately pushing him out of the top-10 before the end of Stage 1.

● At the conclusion of the stage, Custer pitted for four tires, fuel and wedge adjustments.

● He battled just outside of the top-10 for the duration of the stage.

● Custer battled his Haas Automation Mustang back into the top-10 on the restart.

● Custer ran consistently in eighth until the caution on lap 138. He pitted for four tires and restarted in the seventh position.

● After a final caution leading into overtime, Custer restarted from the 10th position and battled to ninth place to secure a top-10 in his first start at Darlington.

● There were a total of 11 lead changes among five drivers.

● Denny Hamlin won the Sport Clips VFW 200 to score his 17th career XFINITY Series victory, second of the 2017 season and fifth at Darlington Raceway. His margin of victory over second-place Joey Logano was .185 of a second.

“We started off fairly decent. We just needed that run to go green that first run. I honestly didn’t know what the track was going to do. The next run we made a wrong adjustment just because I was probably saying the wrong thing. We put it back and were pretty decent. We just needed the restarts to go our way a little bit better there at the end. Overall, it was a solid day. I wanted a little bit better, but it is what it is. It was an honor to run the Sam Ard paint scheme this weekend on our Haas Automation Mustang.”