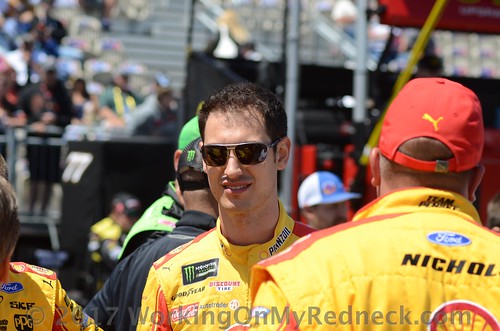 Recap:  Joey Logano started 10th and raced his way to second in the No. 22 Fitzgerald Glider Kits Ford Mustang in the Sport Clips Haircuts VFW 200 at Darlington Raceway. Logano led a race-high 58 laps on his way to the runner-up finish, including down the backstretch on the white flag lap as he battled race winner Denny Hamlin through into turn 3. When the race began, Logano reported his Ford Mustang was extremely tight, keeping him stuck to the high-line through both ends of the speedway. With tire conservation being critical, the team remained on the track until the conclusion of the first stage at lap 45 where they finished in the fifth position. On the first pit stop of the race, the Fitzgerald Glider Kits crew made wedge and air pressure adjustments, along with repairing a small hole in the nose, and sent Logano back onto the track with the race lead. During the second stage, Logano would drift back to the third position, reporting the handling of the Mustang had shifted as far loose as it was tight during the first run. Crew chief Greg Erwin called for adjustments on the stop, going half back from what the team did on the opening stop. Again, the crew, who will also pit Logano’s No. 22 Shell-Pennzoil Ford Fusion intomorrow’s Southern 500, sent the Fitzgerald Mustang back out with the lead. A late caution at lap 137 would bring Logano back to pit road in the second position, and the team again claimed the lead with an extremely fast stop. On the penultimate restart, Logano checked out to an eight car-length lead, but an unfortunate last caution would setup a green-white-checkered finish. On the start, Logano slipped back to the second position after Eric Jones propelled teammate Denny Hamlin to the lead entering turn 1. Logano would reclaim the top-spot with a power move entering turn 1 on the final lap, but Hamlin would successful execute a crossover move in the final corner to win by .185 seconds. The finish helped the No. 22 Ford Mustang team extend their lead in the owners’ points as the series heads into the final two events of the regular season.

Quote: “Obviously, second hurts.  We want to win every one of them and we just got out-motored.  He went through the gear box and got position on me and off he went.  He had me at his right-rear quarter, which allowed him to stay wide open and clear me.  I thought I had a run down the backstretch.  He knew what I was thinking and I knew what he was thinking.  I was just hoping that I got up to the wall and was able to rotate when I got there, but I just got tight when I got there. It’s either that or wreck each other.  It’s one or the other.  Denny and I usually race each other pretty well, so we were gonna race each other clean for the win.”