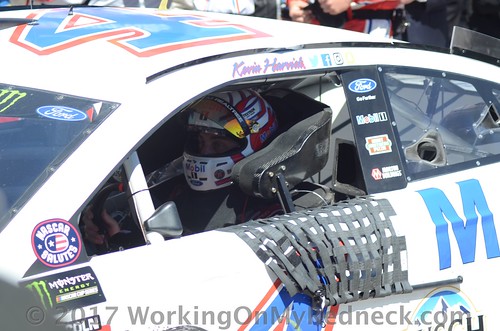 Covering the 1.366-mile distance in 27.669 seconds (177.730 mph) in the final round, Harvick earned his second career pole at The Lady in Black. The first time Harvick was the top qualifier at Darlington was in 2014. He went on to win the Bojangles’ Southern 500. After that he won the series championship.

Last year, Harvick started first and finished second when the field was ordered according to owner points because of a qualifying rainout.

The Coors Light Pole Award was Harvick’s fourth of the season and the 21st of his career. It also represented a benchmark of progress the Stewart-Haas Racing organization has made in its transition from Chevrolet to Ford in 2017.

“I think, obviously, we’ve had a big gap of learning since we switched to Ford,” said Harvick, who swept all three rounds of qualifying in the No. 4 SHR Ford. “A lot of things have been different. We’ve had to do a lot of things different, and the work load’s been pretty heavy.

“I’m really proud of everyone at Stewart-Haas Racing for everything that they’ve done. We just keep getting better and better. Hopefully, we can keep improving, and hopefully this is a sign of things to come on Sunday night.”

“That was definitely a good qualifying session for us,” Truex said. “We were off a little bit in the first round and just kept working on the car. I kind of adjusted my driving style throughout all three rounds, and we ended up second.

“It seems like we’ve been second a lot this year, and it’s been a good number for us, and hopefully it’ll be a good one on Sunday night.”

Among drivers trying to fight their way into the playoff with race wins, Joey Logano qualified eighth, Erik Jones was 10th and Clint Bowyer was 16th. Dale Earnhardt Jr. will start 22nd in his last Darlington race in the No. 88 Hendrick Motorsports Chevrolet.

“We didn’t make any qualifying runs (in practice), and we got something decent out of today,” said Earnhardt. “In race trim, we fell off really hard on the long run, so we’ve still got some more time to work on it. We just need to keep looking forward and see if we can get better.”

“Anything can happen in this race. There’s limited sets of tires and you never know what can happen. Hopefully, we can get enough speed in our car and have the right strategy and the right tires at the right time.”