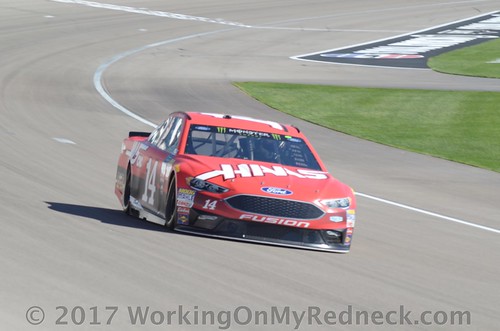 With only two races left in the Monster Energy NASCAR Cup Series season, Clint Bowyer sits on the cusp of the playoff picture. Positioned 58 points behind Matt Kenseth, who’d be the last driver to make the playoffs if the season ended today, Bowyer is the first driver out.

He’ll try to cut in to the 58-point deficit in Sunday’s Bojangles’ Southern 500 at Darlington Raceway, or better yet, win his way into the playoffs.

“We just have to win, a win and the points will take care of themselves,” said Bowyer when asked what his strategy would be to catch Kenseth.

Bowyer has struggled in his 11 Darlington starts. He has just one top-10 showing at the South Carolina track – a ninth-place finish in 2007.

The No. 14 Stewart-Haas Racing Ford driver attributes his Darlington struggles to bad luck.

“I like the uniqueness of the track,” Bowyer said. “I’ve struggled to have good finishes there, but we’ve always raced well. We just can’t seem to seal the deal at the end. Something always goes haywire in the end but, sooner or later, we are going to overcome that and have a good weekend. Doing that this weekend would be perfect.”

Darlington will celebrate its third annual “Throwback Weekend” from Friday through Sunday. The festivities – paying homage to the 1985-89 era – include drivers sporting retro paint schemes, NASCAR Hall of Famers Bill Elliott and Richard Petty piloting the honorary pace car, Bret Michaels performing a pre-race concert and a litany of other activities linking the present to the past.

Bowyer’s No. 14 Ford will feature a paint scheme honoring NASCAR Hall of Famer Mark Martin, his teammate at Michael Waltrip Racing from 2012-13.

“The throwback program at Darlington is the coolest thing I’ve ever been a part of,” Bowyer said. “And seeing this car is really a time check, a time stamp for me.”