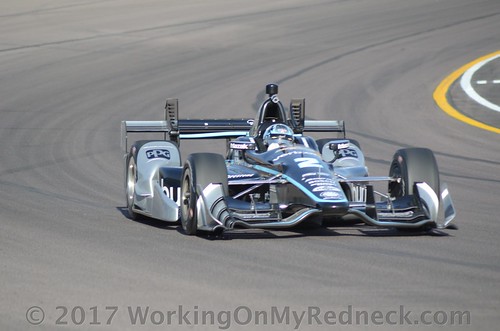 Recap: Simon Pagenaud had the inside track to his second victory of the season on Saturday at Gateway Motorsports Park, but Team Penske mate Josef Newgarden had one more card to play in the closing stages of the 248-lap race. Pagenaud, the reigning Verizon IndyCar Series champion, started the race from the fourth starting spot as the four Team Penske cars started 1-2-3-4 for the second time this season and the fifth time since expanding to a four-car operation in 2015. As was the case a week ago at Pocono Raceway, Pagenaud started the race battling an understeer condition, but was able to keep pace Newgarden and Helio Castroneves in front of him. Pagenaud and the No. 1 Menards Chevrolet team made adjustments to the car to correct the handling issues and got it dialed in for the final 100 laps of the race. Castroneves had a problem on pit road on the third of four stops which allowed Pagenaud to move into second. The last of five caution flags of the night waved on Lap 203 when Ryan Hunter-Reay had trouble in Turn 2 setting the stage for an exciting final trip to pit road for the leaders. Pagenaud was able to get out of the pits just in front of Newgarden to take the lead. On the Lap 212 restart, Pagenaud was able to hold Newgarden off, but there would be one more challenge just a handful of laps later. Newgarden took advantage of some room Pagenaud left on the inside and the two cars made contact entering Turn 1, and Newgarden was able to take the lead. In the wake of the pass for the lead, Scott Dixon was able to work his way past Pagenaud, as well, relegating the French driver to a third-place finish. It was Pagenaud’s 12th top-five finish of the season. By virtue of trailing two of the drivers ahead of him in the championship standings, Pagenaud fell to 43 points out of the top spot but remained in the fourth spot.

Quote: “We had a great race with the Menards Chevrolet. All of the adjustments left us with a great car at the end. When we needed to come up with a great pit stop; we did. Those guys really are the best. They always come through when they have to. Unfortunately, it didn’t work out there at the end. I can’t say that I’m overly pleased, but that’s racing. We still have the championship out there, so we’ll get ready for Watkins Glen.”

Recap: In what already is easily the best season of Josef Newgarden’s career, he and the No. 2 PPG Chevrolet team brought home their fourth Verizon IndyCar Series win in the Bommarito Automotive Group 500 on Saturday at Gateway Motorsports Park in Madison, Ill. The Tennessee native started from the outside pole position next to teammate Will Power. In an odd twist of events, Tony Kanaan spun on the pace laps and INDYCAR officials decided to start the race under the caution flag. The race went green for the first time on Lap 5 and Newgarden quickly went to work and made an outside pass of Power in Turn 1 which inadvertently sent Power spinning into the wall. The PPG Chevy remained in the top spot until they pitted on Lap 61 for fuel, tires and a front wing adjustment. After JR Hildebrand hit the wall and brought out the caution on Lap 103, Newgarden headed to the pits for more adjustments and restarted from the second position. Newgarden, who led a race-high 170 laps, had a final pit stop to make when Ryan Hunter-Reay had trouble on Lap 203. As the leaders rolled off pit road, Simon Pagenaud was able to edge Newgarden at the line to assume the lead. On Lap 218, Newgarden exploited some space Pagenaud left to the inside entering Turn 1. The two cars made slight contact, but Newgarden emerged with the lead and was able to hold off runner-up Scott Dixon for the final 30 trips around the 1.25-mile oval for the win. The victory gave Team Penske its fifth consecutive win for the team’s longest INDYCAR winning streak since notching seven straight wins in 1994. With all four of Team Penske’s drivers visiting Victory Lane this season, the team has a series-best nine victories after scoring 10 wins a season ago. The win enabled Newgarden to stretch his points lead to 31 markers over Dixon as he makes a run at his first series title.

Quote: “It was a great night. First off, we had an awesome crowd. It was amazing actually what was out here tonight. I felt like the energy for this event, it really spurred everyone on. You should have seen all the drivers. I felt like everyone was a little extra nervous tonight because of the energy in this place. I remember watching this race when I was younger. They stopped coming here, I think 2003 was the last race. It’s fun to have it back in 2017 and see it so well supported for the first year. It was a great night to go racing. I felt like the PPG Chevrolet was going to be good tonight. We had four good cars at Team Penske. Happy to get the win on the No. 2 car side because I felt like we had the car to beat. I didn’t want us to be denied tonight for sure. Simon gave me a lane to work with. I had a good tow on him, put my car inside in the opening, got about halfway alongside of him. One thing I didn’t want to do was touch him too hard. I think if I would have stayed too far left, I would have jumped the curb and that would have taken both of us out. I tried to get Simon to move over a little when we were coming to the opening of the corner. We both had to slow up. Fortunately, it worked out well for us. Pagenaud didn’t get up into the wall or anything like that, so I would say it worked out okay for him, too.”

Recap: Helio Castroneves and his team brought a strong No. 3 Shell Fuel Rewards Chevrolet to Gateway Motorsports Park and wound up with a solid fourth place finish under the lights at the 1.25-mile oval. Starting from the third position after the Team Penske cars qualified 1-2-3-4 for the second time this season and the fifth time since expanding to four cars in 2015. After some early race fireworks in separate incidents by Tony Kanaan and polesitter Will Power, Castroneves settled into the second position for the early portion of the race. On the second round of pit stops Castroneves was able to get out in front of Newgarden and led 52 laps in the middle portion of the 248-lap race. On the third stop of the night, the engine of Castroneves’ Chevrolet-powered machine stalled which consequently shuffled him out of the top five. However, the Brazilian veteran battled his way back to score a fourth-place finish. Castroneves has scored six straight top-10 finishes since a 20th-place finish at Texas Motor Speedway as a result of an early race crash in June. With his seventh top-five finish of the campaign, Castroneves remains third in Verizon IndyCar Series championship standings, just 42 points behind leader and teammate Josef Newgarden.

Quote: “The Shell Fuel Rewards Chevy was awesome tonight. We had a little mistake on pit road that cost us and that was unfortunate. The car was definitely good enough to win. It was fantastic to be back at Gateway. The crowd was amazing. It looks like the whole community has embraced this event.”

Recap: Will Power’s quest for a second Verizon IndyCar Series championship took a hit Saturday night at Gateway Motorsports Park after winning his sixth Verizon P1 Award in Friday’s qualifying session behind the wheel of his No. 12 Verizon Chevrolet. It was the 50th pole win in his series career which puts him in a tie with teammate Helio Castroneves for third on the all-time series list. Power led the first five laps of the race as it started under caution due to a Tony Kanaan spin in Turn 1 on the pace laps. When the green flag waved on Lap 6, eventual race winner Josef Newgarden made a move to the outside of Turn 1 to take the lead which sent Power spinning out of contention. It was a perfect storm of a slick track, not enough heat in the tires and dirty air produced by the turbulence Newgarden’s car. Power slid into the outside retaining wall along with the Chevrolet of Ed Carpenter. Despite the incident happening in the early part of the race the damage to Power’s car was too much for the team to repair. Power, who has three wins on the season, recorded his fourth DNF of the season. In the championship standings, he held onto the fifth position, but dropped to 83 points off the pace.

Quote: “It wasn’t a fun ride. Josef (Newgarden) went around the outside and got some of his dirty air and just lost it. Unfortunate. Very frustrating. Unbelievably frustrating for the whole Verizon Chevrolet team. It was just slippery. Super slippery. I wish I had done a few more burnouts to get more heat in the rear tires. The fronts were very slippery too. He just took my air going around on the outside. I tried to get back to power and got some dirty air. It just went. Unfortunate.”