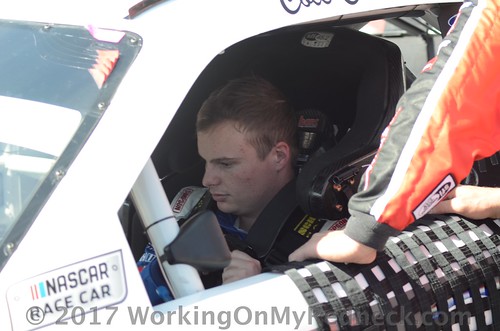 ● Custer kept his Haas Automation/One Cure Ford Mustang inside the top-10 for the majority of the stage while battling tight-handling conditions.

● At the conclusion of the stage, Custer pitted for four tires, fuel, chassis adjustments and air pressure adjustments.

● Custer drove in the top-10 throughout Stage 2.

● To further correct tight-handling conditions, Custer pitted for four fresh tires, fuel and chassis adjustments at the conclusion of the stage.

● During a lap-217 caution, Custer pitted for four fresh tires, fuel and wedge adjustments. He restarted in the eighth position.

● After the final caution on lap 285, Custer pitted for four more tires, fuel and wedge adjustments.

● Custer restarted in the ninth position and competed in the top-10 for the remainder of the race.

● Custer was the highest-finishing rookie in Stage 1.

● Kyle Busch won the Food City 300 to score his 91st career XFINITY Series victory, his fifth of the season and his ninth at Bristol. His margin of victory over second-place Daniel Suarez was 1.181 seconds.

Cole Custer, driver of the No. 00 Haas Automation/ One Cure Ford Mustang for Stewart-Haas Racing:

“I’m happy with our day. I think we could have done a little bit better, but the track just changed so much. It was definitely a learning curve for me. It was a lot about restarts and who you were behind and what lane you were in, but we brought a pretty solid Haas Automation/One Cure Ford Mustang. We probably should’ve finished fifth to seventh and I probably could’ve done a little bit better job, but I learned a lot for when we come back the next time.”