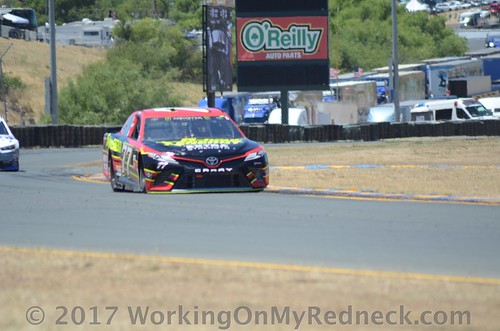 Running the bottom of the track in the strip of traction compound applied to the lower groove, Jones turned a lap at 128.082 mph (14.981 seconds) in the final round of knockout qualifying to edge last Sunday’s Michigan winner, Kyle Larson (128.057 mph) by .003 seconds.

The Coors Light Pole Award was the first for the Sunoco Rookie of the Year contender.

“We’ve got a good pit stall; we’ve got a good starting spot,” said Jones, who finished third in the No. 77 Toyota behind Larson and Furniture Row Racing teammate Martin Truex Jr. at Michigan. “I’ve been saying each week, we just need to have a solid weekend.

“We need to qualify well. We need to have good pit stops and we need to race well. We’ve checked off a few of those things so far. We just need to keep it going for tomorrow night.”

Larson brought a contrarian strategy to qualifying, running the top of the track through the third and fourth turns, eschewing the grip strip at the bottom.

“I wish I could have gone just a few thousandths faster, but ended up second,” Larson said. “So not bad. I really wanted that pole there just because I was doing something different than everybody, but we’ll start on the front row tomorrow and hopefully be there at the end.”

Larson made one mock qualifying run in the top lane during practice and migrated to the top in the second round.

“I think I can find my rhythm faster up top than most,” Larson said. “So it’s just sketchy. You’re going so fast here and on the edge already on the bottom. So if you haven’t tried it up top in qualifying trim, it’s hard to commit. But I ran one lap up there in practice in qualifying trim. It felt pretty good. I kind of kept that in the back of my mind. I wish I would have gotten the pole, like I said, but Erik is really good here at Bristol. It will be fun racing with him tomorrow.”

The two pole favorites, Joe Gibbs Racing teammates Kyle Busch and Denny Hamlin, both found themselves in the top lane at the .533-mile concrete track—but not by design. After posting the fastest lap of the day (129.921 mph) in the first round, Busch washed up the track in Turn 3 on a hot lap in the second round and qualified 18th, missing the cut for the final round.

Hamlin had the best lap in Round 2 (128.632 mph) but duplicated Busch’s miscue in the money round and earned the seventh starting position for the 24th race of the season.

Kasey Kahne (127.877 mph) qualified third, followed by Chase Elliott (127.656 mph) and Matt Kenseth (127.563 mph). Elliott and Kenseth are both winless this year but are fighting for one of the three playoff spots currently available on points.