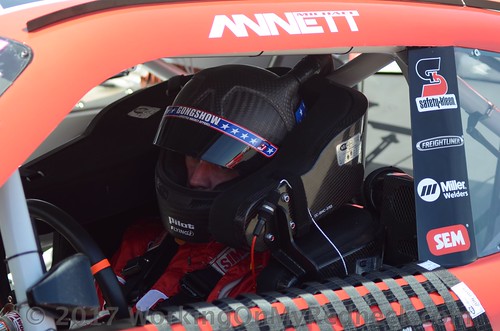 JR Motorsport’s driver Michael Annett is once again on the hot seat – residing in the 12th and final playoff spot in the NASCAR XFINITY Series standings.

Still, the position could be worse. He is a somewhat comfortable 34 points ahead of 13th-place Ryan Sieg. In 21 starts this season, Annett has posted five top 10s and an average finish of 18.1.

Fortunately for Annett, he has outperformed his closest combatants at Bristol, posting an average finish of 13.6 at the half-mile compared to the average finishes of Ryan Sieg (20.1).

And in Friday night’s Food City 300, Annett will have a little more motivation. His boss, Dale Earnhardt Jr., will compete in the NASCAR XFINITY Series for the first time in 2017, driving the No. 88 Goody’s Mixed Fruit Blast Chevrolet.

“After two road courses in a row, it will be nice to get back to what we do the majority of the season,” Annett said. “I’ve run pretty well at Bristol in the past, and we were 10th in the spring, so we’ll take our [No. 5] Pilot Flying J Chevy up there this weekend and try to do it again. The playoffs are approaching, and it’s time to get some momentum going.”