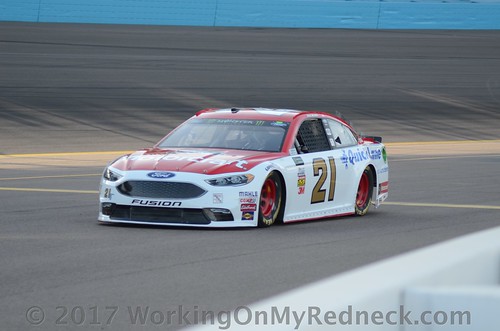 Ryan Blaney and the No. 21 Motorcraft/Quick Lane team head to Bristol Motor Speedway looking for a strong run to build momentum as Blaney prepares himself to battle for his first championship in NASCAR’s elite division while his Wood Brothers team is seeking its second car owner title.

Many fans know the Woods, NASCAR’s longest continuously operating team, have won 99 Cup races and 117 poles, but few realize the Woods also have an owner’s championship from the 1963 season.

The ’63 season saw Joe Weatherly win his second straight championship by cobbling together a string of nine different car owners through the course of the season. Weatherly, who had driven the Woods’ No. 21 himself in four races in prior seasons, ran a total of 53 races in 1963, winning three of them and scoring 20 top-five and 35 top-10 finishes. But since he ran for so many different owners none of them accumulated as many points as the Woods, who ran 23 races with the No. 21 scoring three wins, 16 top-five and 20 top-10 finishes.

Lund won the Daytona 500 that year, while Panch won at North Wilkesboro and Wood at Bowman Gray Stadium in Winston-Salem, N.C.

The owner’s championship trophy from 1963 carries the name of Ray Lee Wood, one of the original Wood Brothers crew and a brother of other team members Glen, Leonard, Delano and the late Clay. Ray Lee was a tire changer before retiring from racing in 1965.

Glen Wood said he listed his brother’s name as the car owner in ‘63 to save money.

“You had to buy a different license for the driver and car owner, so instead of buying two in my name I put one in Ray Lee’s,” Wood recalled. “I saved ten dollars by doing it, but ten dollars was a good bit of money back then.

If Blaney and the Motorcraft/Quick Lane team were to win the championship this year, Wood will be expecting a much bigger check than he received back in 1963.

“I don’t even remember how much it was,” he said. “But it was nothing like what it pays today.”

The next step on the road to the championship is on Friday at Bristol Motor Speedway, where qualifying for the Night Race is set for 5:45 p.m. on Friday and the 500-lap race is scheduled to start just after 7:30 p.m. on Saturday with TV coverage on NBC.