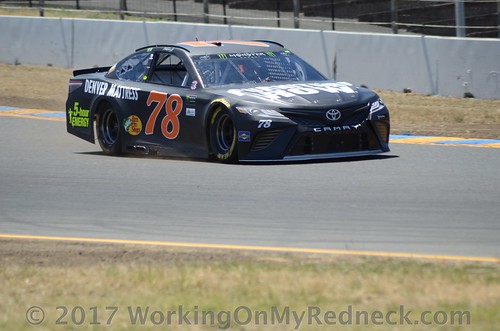 Winning the 26-race regular season championship is significant not only for prestige, but more importantly for securing an additional 15 playoff bonus points. Truex currently leads the NASCAR Cup Series with 35 playoff points. The 10-race playoffs start Sept. 17 at Chicagoland Speedway in Joliet, Ill.

“It might appear that we have a safe margin, but I’ve been around long enough to know that points can dwindle fairy quickly,” said Truex, who will drive the No. 78 Bass Pro Shops/Ducks Unlimited Toyota at Bristol. “The next three races – Bristol, Darlington and Richmond – are at tracks where the odds are higher of your day ending prematurely.  So that’s why I am not looking ahead or counting points. All the focus right now is getting a good result in Bristol.”

The half-mile Bristol short track hasn’t been one of Truex’s best over the years with two top fives and three top 10s in 23 starts. But his performance at this year’s spring race at Bristol did show that he can be a contender at the high-banked, all-concrete oval. Truex qualified third, won the first stage and finished eighth overall. He led more laps – 116 – than he did in his previous 22 Bristol starts.

“We all know the consequences of Bristol,” noted Truex. “It’s a place where you can go from having a good day to a bad day rather quickly. Staying on the lead lap and not suffering any major damage to your car are key to having any kind of success there. The luck factor also comes into play. We had a good run there in the spring and look forward to the same in our Bass Pro Shops/Ducks Unlimited Toyota.”