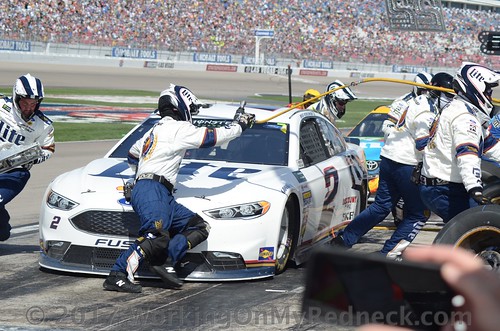 Recap: Competing at his home track at Michigan International Speedway (MIS), Brad Keselowski started from the pole in the No. 2 Miller Lite Ford Fusion and led a race-high 105 laps Sunday in the Pure Michigan 400 but the native of Rochester Hills, Mich., was not able to secure his first career Monster Energy NASCAR Cup Series victory at the two-mile superspeedway located in the Irish Hills of Michigan. Keselowski won his 14th career MENCS pole on Friday, completing a Team Penske front row sweep after he edged teammate Joey Logano for the fastest time in qualifying. Sunday, Keselowski got off to a great start in the Miller Lite Ford as he won the 60-lap opening stage of the race for his fourth stage victory this season. After a strong pit stop by the No. 2 crew a few laps before the end of Stage 2, Keselowski closed strong to finish second in that stage and he told crew chief Paul Wolfe that the Miller Lite Ford Fusion was the best he felt it all day after the latest round of adjustments made to the car to keep up with the changing track conditions. On a Lap 128 race restart in the final stage, Keselowski reclaimed the lead from the No. 78 machine of Martin Truex Jr. but Truex took back the top spot and the battle seemed to affect the handling of the No. 2 machine as Keselowski fell back inside the top five. In the closing segment of the race the Miller Lite Ford took on just two tires on consecutive pit stops in order to gain some positions on pit lane and get back up front and Keselowski looked to still be in a position to produce a solid finish but a couple of late caution flags for on-track incidents wound up pushing the No. 2 car down the running order. On the final race restart with two laps of overtime, Keselowski got shuffled back in a slew of traffic and wound up taking the checkered flag in the 17th position. The result ironically allowed Keselowski to move up one position in the driver point standings to fifth place and he now runs 213 points off the pace of Truex Jr., the series leader.

Quote: “The team did a good job.  We executed in qualifying and all of those things, and we really made the most out of everything we had today, it just didn’t come out our way. “It just didn’t come together there at the end, but it was nice to lead a bunch of laps.  That was good and something I was really proud of, but I just didn’t have enough to really run with the 77 and the 78.  We tried a little strategy to kind of get something out of it, but the way it all played out I ended up getting the bottom lane on the restarts and getting absolutely swallowed.  We tried.  We put in as much effort as we could.  We knew we didn’t have as much as those two, but we gave it 100 percent effort and I was really proud of my team for that.”

Recap:  Joey Logano started second and finished 28th in Sunday afternoon’s Pure Michigan 400 at Michigan International Speedway in the No. 22 Shell-Pennzoil Ford Fusion. At the start of the race, Logano settled into the third position and continued to run there as the race went green for the entirety of the first stage. Crew chief Todd Gordon called Logano to pit road at lap 40 under the green flag for tires and fuel, along with wedge and air pressure changes. The team cycled out into the fifth position after the completion of stops and Logano ultimately finished the first stage in the sixth position. Logano reported that the wedge and air pressure had helped the handling of the car on the first stop, but still needed more to correct the loose entry and center turn tightness. During the second stage, Logano battled tightness in traffic and the team worked on a strategy for additional adjustments on the next stop. Logano would visit pit road again at lap 109, where Gordon again called for a wedge adjustment on the No. 22 Ford. At the end of the second stage, Logano reported the handling of the car was improved, but still needed more help turning in the center. The team finished the second stage in the 12th position and would remain on the track until lap 157 when they came down and pitted for four tires and fuel. From that stop forward the handling deteriorated and on lap 183, the day took a turn for the worse when a right front tire went down, damaging the fender are of the No. 22 Ford. The team would make repairs but find themselves trapped two laps down with only 15 laps remaining in the race and finish in the 28th position.

Quote:  “The speed wasn’t there.  We were a little better and obviously in qualifying our cars are good, but we just couldn’t hang with the Toyotas up front there.  Those two cars there – really the Furniture Row cars is what I should say.  They’re just lights-out fast.  The fastest car didn’t win the race, I can tell you that much for sure.  We had a flat tire.  I don’t know why we had a flat tire, but maybe we ran something over.  I don’t know.  On to the next one.  We’ll keep moving.”