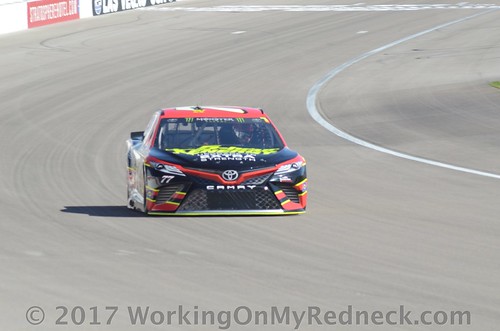 Two late-race restarts in Sunday’s Michigan Pure 400 gave Erik Jones and the No. 77 5-hour ENERGY Toyota team chances to earn his first NASCAR Cup Series victory in storybook fashion but he instead took the checkered flag with a career-best tying third-place finish at Michigan International Speedway.

The Byron, Mich., native lined up next to race leader and Furniture Row Racing teammate Martin Truex Jr. twice in the final 10 laps. But it was Kyle Larson who slipped past both in the two-lap NASCAR overtime shootout after a red flag to spoil the Denver, Colo.-based team’s 1-2 finish. Truex’s runner-up finish and Jones’ third was still Furniture Row Racing’s best result as a two-car team.

The third-place finish on the two-mile oval was also Jones’ third straight top 10 and eighth of the season. It equaled his season best of third at Pocono Raceway in June. He is currently 16th in the NASCAR Cup Series driver point standings after 23 races, just 12 points behind Ryan Newman in 15th place.

“I wasn’t exactly where I wanted to be (inside lane) on the final restart, but I thought we could get a good enough restart where we could at least battle through (turns) one and two and hopefully make something happen into (turn) three,” said Jones. “Unfortunately, that didn’t work out, both of us couldn’t get going – Martin was spinning his tires and I was spinning my tires. He got a push from the 42 (Larson) and he passed us both. It’s unfortunate; I thought it was going to be a Furniture Row one-two (finish) either way. Wish the 5-hour ENERGY Camry could have had a shot at it, but it was a good day for us.”

It appeared Truex and Jones were going to finish 1-2 with both drivers having a safe margin in track position late in the race. But a caution for a multicar accident with four laps remaining in the scheduled 200-lap race first slowed the field then stopped it to allow track workers to clean up the debris resulting from the wreck.

“I thought this might be my day for a few moments and then the 78 (Martin Truex Jr.) really kind of picked it up there the last 50 laps or so and he was really fast,” said Jones. “We were kind of in our own league there for a long time – we were kind of matching lap times, he would go faster and I would go faster. I really thought that whoever was out front was going to win, unfortunately neither of us got it done. Neither of us really got going great after that last restart. I spun my tires, he spun his and it just wasn’t what we needed at the end.”

After qualifying eighth, Jones was steady all day in his No. 77 5-hour ENERGY Toyota Camry. He led twice for five laps and the strategy devised by interim crew chief James Small and his team of engineers seemed to be playing out perfectly. From Lap 134 on, Jones ran second to Truex for a majority of the stretch run to the checkered flag on the track just 70 miles south of where he grew up.

The race had 14 lead changes among seven drivers. There were five cautions for 28 laps and one red flag for nearly six minutes.

The next race is Saturday night, Aug. 19, at Bristol (Tenn.) Motor Speedway.