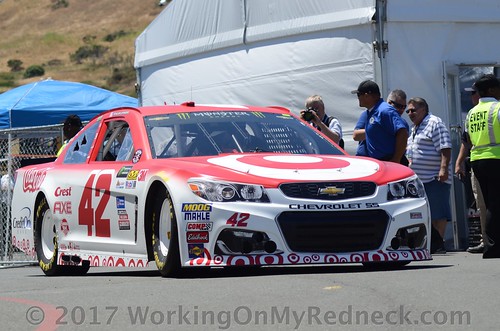 Sitting in his racecar during a red flag delay near the end of the Pure Michigan 400 at Michigan International Speedway, “Young Money”, aka Kyle Larson, pondered the possible routes to an overtime victory. He was in fourth-place and would restart for the final two-lap shootout behind leader Martin Truex Jr. on the outside line.

Larson hadn’t had a fast racecar all day at Michigan International Speedway, but he thought with a gutsy move on the restart, he could steal a win in the Monster Energy NASCAR Cup Series race. Ahead of him, Truex, the race leader, was in the opposite positon. He had had a fast racecar all day, and he figured he needed a strong restart to repel whatever move Larson or somebody else would throw at him. Like Larson, he was trying to figure out which scenario would be most likely to take him to Victory Lane.

As it turned out, Larson and Truex both drew up the same plan—they both wanted Larson to hit Truex on the restart. They just had different ideas about what would happen after the push/hit.

Truex hoped the contact would push him forward and to the victory, and for a very brief second, that seemed possible. But Truex spun his tires, which played right into Larson’s strategy.

“I wanted to time it and get to his bumper and act like I was pushing him out to the lead and duck underneath him and get to his left-rear quarter and pull him back,” Larson said. “It’s crazy how when you get to someone’s left rear quarter how much it slows them down. It did just that.”

Larson bounced off of Truex as he passed him, and for a split second the race fanned out four wide. That never ends well—especially not on the penultimate lap when all four drivers are going for the win and nobody is willing to lift! But somehow they all stayed off each other, and afterward, rookie Erik Jones, one of those drivers, was at a loss to explain how. “I was pointed at the infield for half of (Turns) one and two,” said Jones, who finished third.

After the pass, Larson’s car was loose for the rest of the restart lap and the white flag lap. But he put enough distance between him and Truex that Truex couldn’t catch him and had to settle for second. Those were the only two laps Larson led all day. The thrilling win in a car that had no business doing so looked like a career defining move for Larson, the young driver from Elk Grove, California.

The win was an exclamation point on an already great week of racing for Larson. He (Larson) finished second late Saturday night in the Knoxville Nationals, one of the biggest dirt races in the world. His contract forbids him from running on dirt the night before he has to be on track for NASCAR, be it practice, qualifying or a race. But on Thursday, he talked team owner Chip Ganassi into making an exception.  It also didn’t hurt that thousands of sprint car fans inundated Ganassi’s Facebook page and emails asking him to let Larson race at Knoxville.

Ganassi harbored misgivings about the decision—he thought Larson, who didn’t get back to Michigan from Knoxville, Iowa until 2:30 a.m. Sunday might be too worn out for the 400 mile race, and those doubts grew bigger in the middle of the race as Larson languished in the middle of the pack. But after the win, Ganassi joyously shook team members on the pit box and planted a kiss on Larson.

It was Larson’s third consecutive win at Michigan. The only other drivers to accomplish that are David Pearson and “Awesome Bill From Dawsonville”, both of whom are in the NASCAR Hall of Fame. The race was slowed by five cautions for 28 laps.

Michigan native Brad Keselowski won the first stage. He dominated the first half of the race, leading five times for 105 laps. But he faded to 17th. Truex led three times for 57 laps and won the second stage. Truex kept his position atop the points race, but finished runner-up.

What Larson showed the NASCAR world at Michigan was that he willed himself to win that race.  He proved to all that he wanted the victory more than the rest of the field!