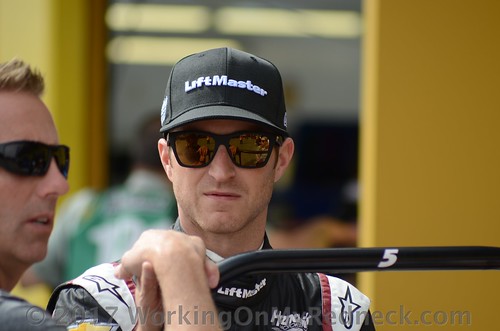 Kasey Kahne’s job hunt started soon after it was announced that he would not return in 2018 to the No. 5 Hendrick Motorsports Chevrolet.

He has won six races in his nearly six years at Hendrick Motorsports and 18 in his career. He is widely considered to have underperformed in his time at Hendrick. Kahne is hopeful he will be able to land a ride in the Monster Energy NASCAR Cup Series and that the new job will rejuvenate his career.

“I think that it’s all about people,” Kahne said. “If you can get the people behind you and believe in you and then I believe in them, and we work together for the same goal to win races. It’s a competitive series it is a super tough series to win in and so many things have to go right for the entire race weekend and then throughout the race.”

Team owner Rick Hendrick shouldered the blame for the No. 5 team’s subpar performance and says he will help Kahne get a new ride. “To have him behind you is a really good thing,” Kahne said. “I respect him a ton. Yeah, I hope we can build something out of that, but I also have been working in my own direction as well on certain things to make sure I just check out everything that is out there for sure.”