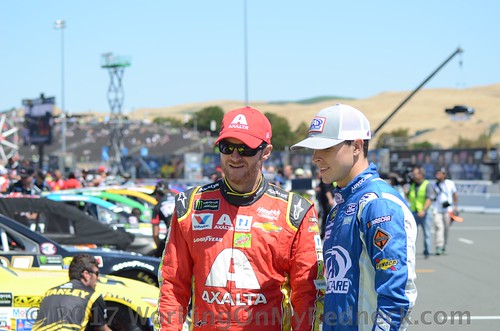 And while Michigan is one of many tracks Dale Earnhardt Jr. will be saying good-bye to this season, he thinks the 2-mile track in the Irish Hills is one of the best.

“This place here is, to me, the standard for the 1.5-mile or 2-mile race track,” he said on Friday, two days before the Pure Michigan 400. “This place is so much fun to race on for a driver. It’s a great race track.”

Some of Junior’s fondest memories from his racing career came at Michigan. And they’re not all wins. He won here twice in the Monster Energy NASCAR Cup Series and twice in the NASCAR XFINITY Series. But one of his strongest memories comes from a race he lost—the 1999 IROC race, the end of which he has rewatched numerous times. Unfortunately, the outcome has never changed!

Coming out of Turn 4 toward the checkered flag, he and his father, Dale Earnhardt Sr., were battling for the win. Rusty Wallace came up behind them. Wallace could have pushed Junior to the win—which would have been poetically perfect, Junior said.

Wallace and Earnhardt Sr. flipped between friends and rivals throughout their careers. That was true on and off the track. If one of them bought a plane, the other one bought a bigger plane. So Junior thought that if Wallace pushed the son past the father for the win, Wallace would have been able to hold that over Earnhardt Sr.’s head forever. But Wallace didn’t get behind either one of them, and the elder Earnhardt won the race.

Junior said, half-jokingly, that he’s still mad at Wallace, 19 years later, for not helping him!