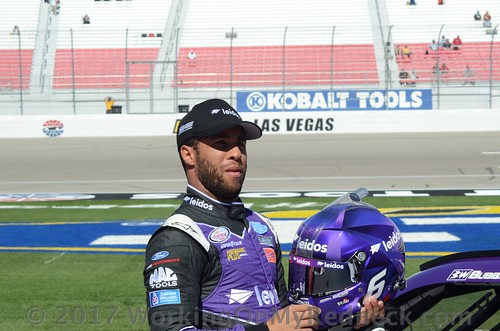 For the final 11 laps of today’s NASCAR Camping World Truck Series race at Michigan International Speedway, Darrell ‘Bubba’ Wallace Jr. protected his leading position. He blocked high and low and middle, and when he briefly lost the lead, he quickly surged his No. 99 MDM Motorsports Chevrolet back ahead. Every move he made in today’s LTi Printing 200 to earn a trip to Victory Lane turned out to be the right one.

Actually getting to Victory Lane, that was another story.

After laying down a massive burnout to raucous applause from the MIS crowd, Wallace stopped his truck on the apron—he seemed unsure where to go. A NASCAR official pointed forward and to the right. Wallace followed those directions.

“It’s been so long since I’ve been in Victory Lane,” Wallace said. “I try to hold a positive mindset over it, and everybody in my family knows it eats at me every day.”

It was Wallace’s first race in a truck since the last race of the 2014 season; he won that race, too. It was his sixth win in a truck and first at Michigan.

After he parked his truck in Victory Lane, it appeared that every member of his team stuck their head in to say congratulations. His girlfriend, Amanda Carter, leaned in and kissed him. This was her first visit with him to a NASCAR Victory Lane. Still shaking a few minutes later, she said, “This is so incredible. It is so awesome.”

It certainly was that for Wallace, whose roller coaster career appeared stalled this season. Wallace, who opened 2017 as NASCAR’s only full-time African American driver, lost his NASCAR XFINITY Series ride with Roush Fenway Racing earlier this year due to a lack of sponsorship. He debuted in the Monster Energy NASCAR Cup Series for four races as a replacement for the injured Aric Almirola. But since then, nothing. His deal with MDM Motorsports was announced just this week.

Wallace entered the race confident his truck was fast. He struggled early on, including a penalty on lap 53 when his pit crew went over the wall too soon. But he worked his way toward the front. He appeared content to stay in third behind Austin Cindric and Christopher Bell as the laps wound down. He and spotter Freddie Kraft sketched out a plan—Wallace would wait for those two to get side-by-side so he could pass them both at once.

“You’re going probably 10 miles an hour faster than they are,” Kraft said. “As soon as they do that, you have the momentum.”

Wallace preferred to wait for the pass until there were only a handful of laps left. But when Cindric and Bell got side-by-side with 11 to go, Kraft keyed his radio and said, “Here’s your chance.”

As cool as it was to see nobody in front of him, Wallace figured it wouldn’t last. He thought other drivers would do to him what he had just done to Cindric and Bell. But the drivers behind him spent most of the time racing each other instead of trying to pass him. And when they did devote their attention to getting by Wallace, he darted and dived and kept them behind.

Check out the unofficial results of the LTi Printing 200 at Michigan.