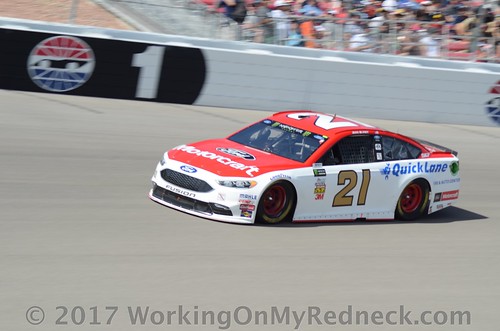 Ryan Blaney and the No. 21 Motorcraft/SKF team were a couple of bobbles away from sweeping the day on Friday at Michigan International Speedway.

But in the third and final round he had to back off the gas after getting loose in Turn One. From that point on, any hope of winning the pole was lost and he wound up in 12th place after a lap at 201.235 mph.

“I just got loose over there [in Turn One],” Blaney said in his post-qualifying comments. “You lose time in one corner, and you can’t make it up.”

Still, it was the 16th time in 23 tries this season that he’s earned a starting spot of 12th or better.

“I’m proud of the first two rounds,” Blaney said. “We didn’t tighten the car up for the last round.”

And the fast times he turned on Friday have him feeling good about the rest of the Michigan weekend.

“We have good speed in our car,” he said. “Hopefully we should be able to drive up through everybody in the race.”

Team Penske, which shares a technical alliance with the Wood Brothers and their Motorcraft/SKFteam, swept the front row with Brad Keselowski taking the pole and Joey Logano earning the outside pole.